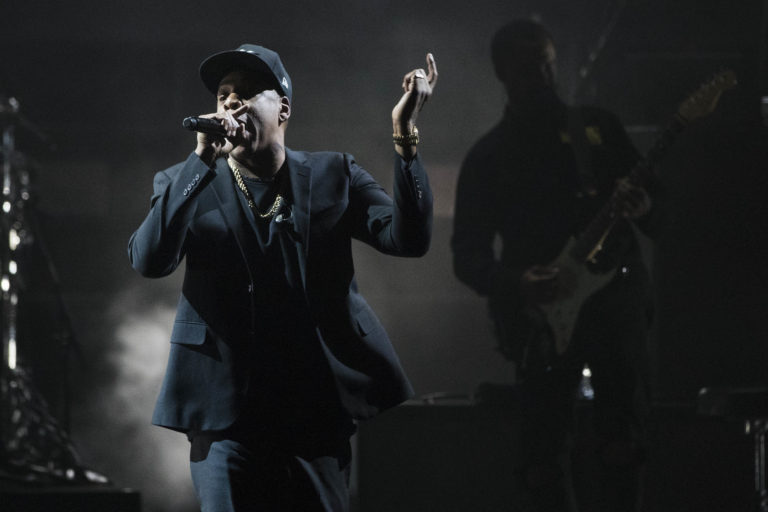 FILE - In this Nov. 4, 2016 file photo, Jay-Z performs during a campaign rally for Democratic presidential candidate Hillary Clinton in Cleveland. Music executive Lyor Cohen says hip-hop should dominate the top categories at the upcoming Grammys. Cohen spoke with The Associated Press on Thursday, Jan. 18, 2018, about the Recording Academy giving rap a “deserving” chance. Both Jay-Z and Kendrick Lamar are nominated for album and record of the year. Jay-Z, the leading nominee with eight, is also nominated for song of the year. (AP Photo/Matt Rourke, File)

Cohen spoke with The Associated Press on Thursday about the Recording Academy giving rap a “deserving” chance. Both Jay-Z and Kendrick Lamar are nominated for album and record of the year. Jay-Z, the leading nominee with eight, is also nominated for song of the year.

Cohen is now YouTube’s global head of music, but has been an integral figure in hip-hop for decades was the former head of Def Jam Records. Next week, he’s hosting a pre-Grammy event with Nas that will pay homage to rap and include appearances by Grandmaster Flash, Q-Tip, Fab Five Freddy and Chuck D.

The only rap-based acts to win album of the year were Lauryn Hill and Outkast, though Hill’s album was mainly R&B and the Outkast album a mix of pop, funk and rap. A rap song has never won song of the year or record of the year.

Cohen credits the Recording Academy for inserting people knowledgeable of the genre to give hip-hop a “deserving” chance.

“I think they have new blood pumping through their veins that are actually aware of the present and future, and not just holding onto the past,” he said.

Cohen said now is the perfect time to celebrate hip-hop with the 60th annual Grammy Awards being held in New York, the birthplace of the genre, for the first time in 15 years on Jan. 28. The show will air on CBS.

The Jan. 26 YouTube’s 80s-themed event will pay homage to the legacy of New York’s hip-hop scene.
Graffiti artist Cycle created a colorful mural on a 55-foot long wall canvas stacked by 400 boxes containing Google Home Max speakers. After he finished the mural, it was deconstructed and each box with a stereo speaker device inside was sent to prospective guests as an event invitation.

“We thought it would be original and unique,” he said. “Our mission was not to do the typical same ole, same ole. But we wanted to do something thoughtful and exciting. It was fun. We had fun with it. … It’s about bringing the past to future. What better way to do it during Grammy week?”

“Jay remains pushing our boundaries and creatively discovering more,” he said. “He’s a creative force. … I’m pinching myself because I’m so happy.”