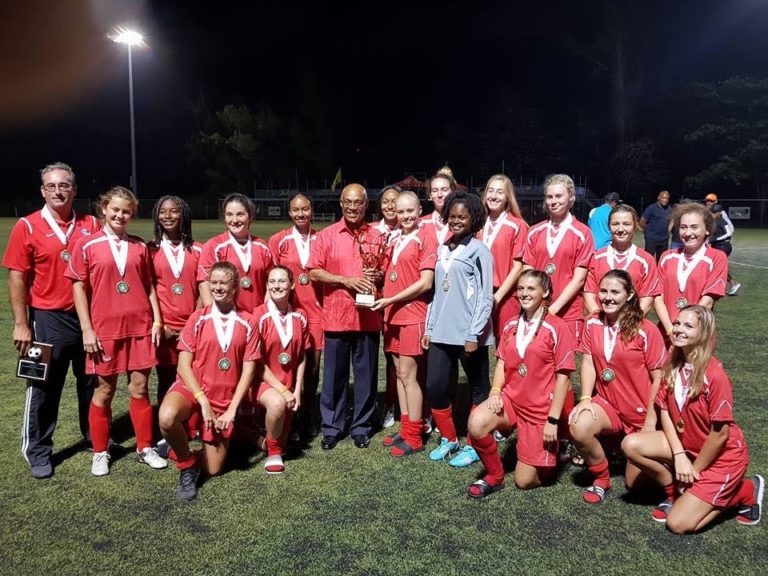 In senior girls’ action, the Lucayan International School (LIS) scored a 2-1 win over Queen’s College (QC). With LIS leading at the start of the second half, Tyra McKenzie scored a goal in the 40th minute to tie the game and keep the Comets alive.

Neither team scored again in regulation, however, LIS edged QC 1-0 in penalty time to secure the title.

The Dragons scored in the 65th minute to take the lead. On the defensive end, Lyford Cay deflected several of the Timberwolves’ shots at the goal to hold on.

“The nationals are always exciting because of the matchups they produce” said Bahamas Football Association (BFA) Secretary General and tournament organizer Adam Miller.

“We saw some great matches and some good competition. The games are always good because it allows teams to play athletes and teams that they may be unfamiliar with, which will help to develop our local players.”

The third and fourth placement games in both divisions also took place on Saturday.

In the senior girls’ consolation game, Bernadette Wilson from C.R. Walker, scored the only goal of the match to secure a third-place finish for the Knights. And in the boys’ division, St. Andrews cruised to a 3-0 win over Tabernacle Baptist.

After being canceled last year for various reasons, both BFA officials and Ministry of Education, Science and Technology representatives said, the hope the tournament can run annually, to help with the development of local soccer.

“Athletes in track and field, basketball and several other sports are afforded many opportunities to showcase what they can do but now, soccer is in that realm,” said Senior Education Officer in the Ministry of Education, Science and Technology Evon Wisdom.

“This tournament has been sanctioned three years in a row with one missing. So, it brings me great pleasure to have it again.

“We see this tournament as a tool to help the BFA to fulfill its mandate of developing soccer in the country. The popularity of the tournament continues to grow so much that we were asked to involve our junior high schools in the next edition. We are also putting together a development program on the Family Islands, so they too, can be invited and play in the national championships.”