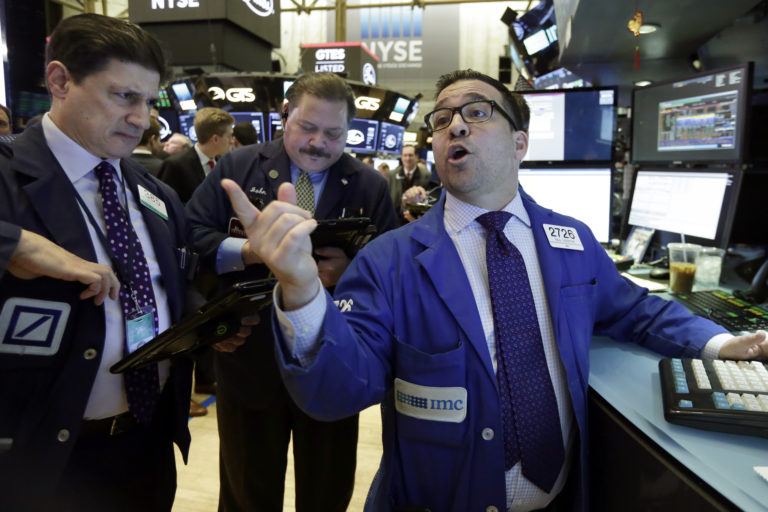 Homebuilders fell sharply after the Commerce Department said sales of new homes dropped in December. Airlines suffered a second day of sharp losses as investors worried about rising costs and the possibility of lower air fares. Retailers and technology companies slipped, but health care companies including Biogen and Celgene rose.

The dollar made small recovery in the afternoon after President Donald Trump said he wants to see a stronger U.S. currency. The dollar has fallen to three-year lows, and it fell further on Wednesday after Treasury Secretary Steven Mnuchin said there were advantages to the dollar’s weakness over the last year.

Investors took that to mean the administration wouldn’t do much to prop up the dollar. Mnuchin said Thursday that he supports a stronger dollar over a longer term.

The Standard & Poor’s 500 index and Dow Jones industrial average still rose enough to set more records, but stocks have wobbled this week as investors monitored the World Economic Forum in Davos, Switzerland, to get a sense of how the Trump administration’s nationalist stance might affect global trade. Trump is scheduled give a speech there at around 7 a.m. Eastern time Friday.

Julian Emanuel, chief equity and derivatives strategist for BTIG, said investors have mostly tuned out political news in the last year, but it might be time for that to change because after a stretch of historic calm in the markets, volatility is rising slightly.

“Economies and earnings are the drivers of the market long term, but politics needs to be respected,” he said.

Stocks have been setting record highs regularly for more than a year, and the S&P 500 is up 6.2 percent this month. It’s on track for its biggest monthly gain since March 2016, a time when the market was recovering after a sharp plunge.

Among airlines, Alaska Air lost $2.62, or 4.1 percent, to $62.07 and Southwest Airlines sank $2.02, or 3.2 percent, to $60.19. They took even bigger losses Wednesday after United Continental said it plans to add passenger capacity at a faster pace over the next few years. That could increase the chances of a glut of flights and lower fares at the same time airlines are dealing with higher fuel expenses and higher labor costs.

The Commerce Department said sales of new homes fell more than 9 percent in December, partly because of severely cold weather. NVR sank $237.20, or 6.6 percent, to $3,350 while Lennar fell $2.35, or 3.3 percent, to $68.47. Those stocks have made huge gains over the last year because of strong demand for homes and rising prices.

Newell Brands, which makes Sharpie pens and Elmer’s glue, plunged to its lowest price in almost five years after it again lowered its forecasts for 2017 and said it will consider selling numerous businesses including Rubbermaid. That’s a sharp change in direction for Newell, which less than two years ago paid $13 billion to buy Rubbermaid’s parent company Jarden.

Bond prices turned higher. The yield on the 10-year Treasury note fell to 2.62 percent from 2.65 percent.

The European Central Bank didn’t make any changes to its stimulus programs. ECB head Mario Draghi said the eurozone economy still needs support to keep raising the rate of inflation toward healthier levels. It will continue to buy 30 billion euros ($36 billion) in bonds per month until at least September.

While major exporters like technology and industrial companies have benefited from the decline in the dollar, it has hurt smaller and more U.S.-focused companies, which have not done as well as the rest of the stock market over the last year.