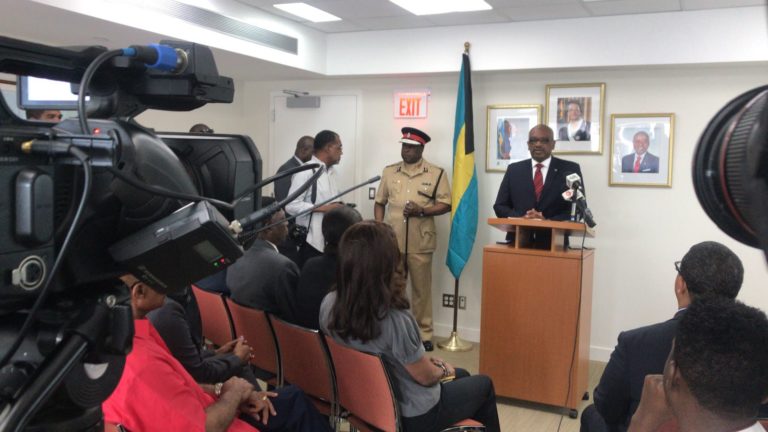 Prime Minister Dr. Hubert Minnis on Sunday speaks to the press after returning home from the Commonwealth Heads of Government Meetings (CHOGM), which were held in London last week.

The country’s revenue losses due to corruption are estimated at half a billion dollars, with the initially released estimate of $200 million being described as a “modest” figure by Prime Minister Dr. Hubert.

The prime minister, who returned from the United Kingdom (UK) yesterday, told members of the media at a press conference in the VIP lounge of the Lynden Pindling International Airport (LPIA) that, the country loses up to $500 million as a result of corruption.

“It was pointed out that five to 10 per cent of the nation’s gross domestic product (GDP) is lost to corruption in some cases as much as 30 per cent,” Dr. Minnis said.

The original $200 million estimate was announced by Dr. Minnis during the Summit of Americas in Lima, Peru last week.

Members of the Official Opposition took issue with the revelation and criticized Dr.  Minis after his address in Peru, for “bad mouthing” The Bahamas.

“This bad mouthing of our country shows that common sense is not common,” said Opposition Leader Phillip Davis in a statement.

“To support his unfounded allegations of a corrupt country, he claimed that $200 million was lost to corruption. The prime minister cannot make such an assertion without saying on what empirical data he bases this statistic or assertion. I ask him to provide the evidence.”

The prime minister however, explained yesterday that corruption was the theme of the meetings at the Summit of the Americas and each participating country gave its view on how the problem is being addressed in their respective jurisdictions.

“I want the opposition to hear me very clearly. You should not be speaking in the dark… my favorite quote is: I would prefer to get punched in the face by the truth than kissed in the face by lies.”

Meantime the prime minister said the government continues to stomp out corruption in various sectors of society.