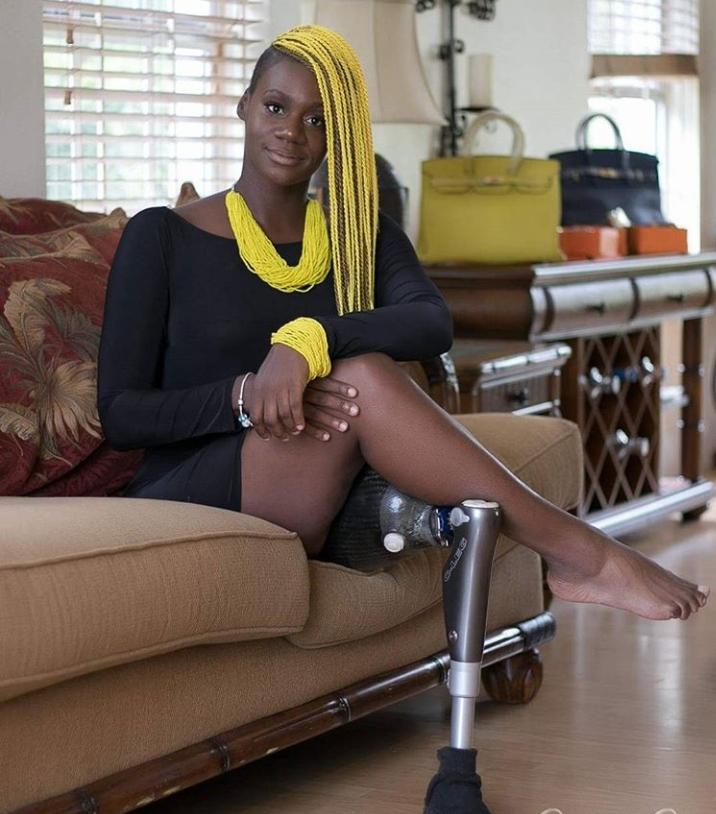 Loss Limb Awareness month may have ended in April, but for those living without limbs, their inability in some cases to carry out basic functions is a constant reminder of their disabilities and more than that – their life’s reality, which one amputee shed light on recently, as she shared her traumatic experience.

On Monday Amputee Erin Brown opened up to Eyewitness News about her traumatic ordeal that left her without a limb in her mid-twenties.

Diagnosed at the age of twenty-four with Osteosarcoma – a type of cancer – Brown had a minor accident while on her Easter break from University.

Brown said she was attending West Virginia State University (WVSU) on a scholarship, studying Business Management, when she found out about her disease.

During the candid conversation, Brown reflected on when she first realized something was wrong with her leg.

While completing routine chores, Brown said, she lost her balance while mopping and fell to the ground.

It wasn’t until the next day, she said, that she realized she couldn’t put any weight on her left leg.

That, she said, was the signal that something was terribly wrong.

Brown further described her accident which ultimately revealed her disease.

“I then went to the doctor, who ordered an x-ray. [The doctor] immediately sent me for an MRI and then made an appointment for me to go abroad to find out what was going on. They (the physicians) never made me aware of anything. They just said they had to go,” she said.

Subsequently, Brown found out about her bone cancer at Cedars-Sinai Medical.

Brown said, she not only lost her scholarship, but her school medical insurance as well, as a result of her disease.

“I had no signs at all,” Brown recalled.

“I was still playing sports. I was still student government president, college queen. I was a mother of a six-month-old and I was doing everything as regular.”

However, life after limb loss has been nothing but an adventure, according to Brown – now a mother of two.

“I have come to terms with losing my left leg,” she said.

“Yet, it is a journey – accepting all the other things that come with being a cancer survivor, an advocate, an athlete, a single mother, an entrepreneur and a woman housed into this unique and enduring body.”

Brown said she no longer sees life as simple and that she views all opportunities and journeys as “divine”. She said she has learned to be more grateful with the curve ball life has thrown at her.

“I have been given a chance to live this life in the most authentic way and I am grateful,” she added.

Brown’s life has been consumed with her now 14-year-old son and two-year-old daughter, who she said, are “the greatest gifts and the biggest challenge all at once.

“Why? Because they see me at my worse – exhausted, elated, invigorated, motivated and defeated at times,” she said.

“I will ride these wheels until they fall off.”

Brown is currently training for the 2020 Paralympics in Tokyo, Japan. She said she is striving to be the first Bahamian woman amputee to qualify and compete in the games.