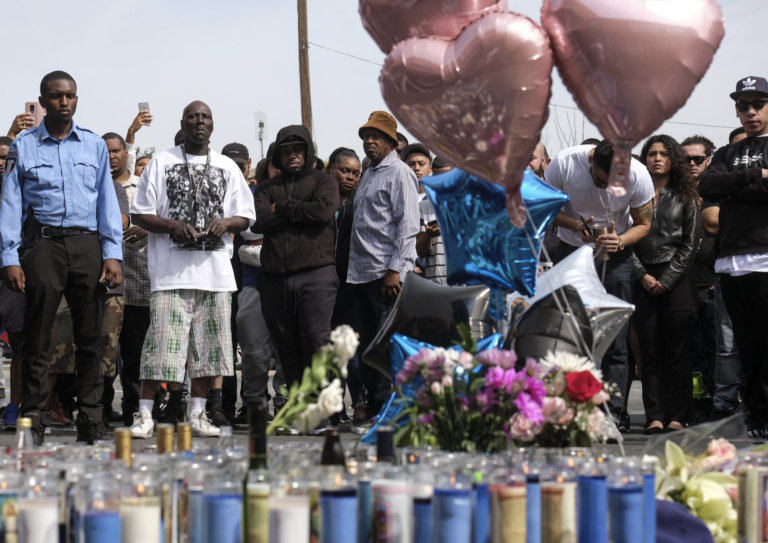 Fans of rapper Nipsey Hussle appear at a makeshift memorial in the parking lot of Hussle's Marathon Clothing store in Los Angeles, Monday, April 1, 2019. Hussle was killed in a shooting outside the clothing store on Sunday. (AP Photo/Ringo H.W. Chiu)

LOS ANGELES (AP) — Los Angeles police are seeking a 29-year-old man who they believe shot and killed Nipsey Hussle outside the rapper’s clothing store where he was trying to remake his community.

Los Angeles police Chief Michel Moore has scheduled a briefing Tuesday morning in which he will discuss how detectives came to identify Eric Holder as the man suspected of killing Hussle Sunday afternoon and wounding two others. No additional details, other than that Holder is suspected of fleeing in a 2016 Chevy Cruze with the license plate 7RJD742, have been released.

Moore also plans to discuss a wider upsurge of violent crime in the city Tuesday morning. The press conference was scheduled before Holder was identified as a suspect. It will be held hours after a disturbance at a memorial for Hussle Monday night left at least 19 people injured, including two people taken to local hospitals in critical condition.

Dozens of police officers cleared the memorial site after a fight apparently broke out and a stampede ensued.

At least one of the critically-injured persons was struck by a car and the other one had a “penetrating injury,” although it’s unclear whether that person was stabbed or cut by broken glass, a fire department spokeswoman said. Two other injuries were serious and 15 were considered non-life threatening.

The incident occurred after hundreds of people gathered for a candlelight vigil outside Hussle’s The Marathon clothing store.

Hussle, who joined the gang Rollin 60′s Neighborhood Crips as a teenager, had planned to meet with Moore and the city’s police commission president on Monday to discuss preventing gang violence.

An autopsy completed Monday showed that Hussle, 33, died after being shot in the head and torso. The rapper, whose real name was Ermias Asghedom, had recently purchased the strip mall where the shop is located and planned to redevelop it into a mixed-use commercial and residential complex.

The plan was part of Hussle’s broader ambitions to remake the neighborhood where he grew up and attempt to break the cycle of gang life that lured him in when he was younger.

The Marathon store on Monday was a gathering point for those grieving Hussle, with mourners leaving candles, flowers, balloons and other items to pay their respects.

Some passersby blared Hussle’s music, which included hits “The Weather,” ″Double Up” and “Hussle & Motivate.”

Dontae Coleman, 28, who lives in the neighborhood, fell to his knees and cried and called Hussle “a legend.”

“Someone changed history yesterday,” he said, referring to the gunman.

Coleman commended the rapper for trying to uplift his own community first instead of simply going elsewhere.

Denise Francis Woods, a neighborhood resident who is running for City Council, remembered when Hussle used to sell his demo tapes on street corners in the neighborhood for $5.

“People would tease him,” she said. “They didn’t think that this would work out and look what happened. He persevered, he stayed in, he never gave up.” The effort took him to a whole other level “where he ended up owning property on the same corner.”