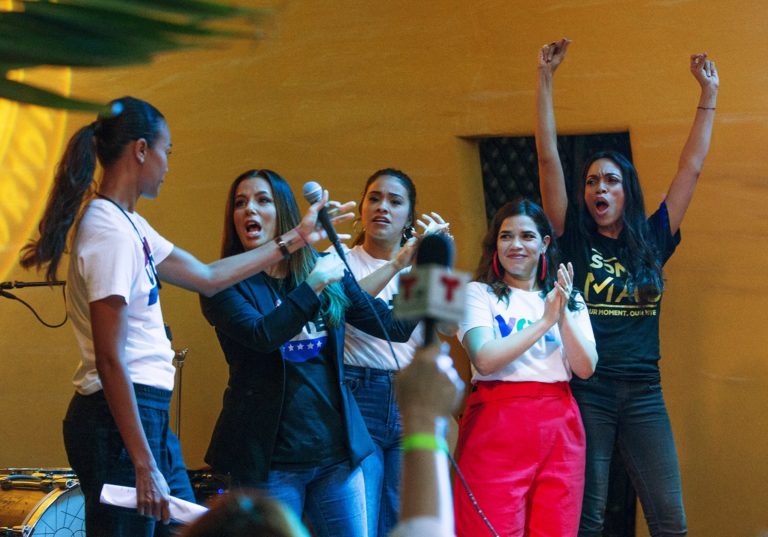 MIAMI (AP) — Eva Longoria, Rosario Dawson, Zoe Saldana, America Ferrera and Gina Rodriguez took to the streets of Miami, leading hundreds of people while chanting “Si se puede” or “Yes we can” in attempt to rally people to vote ahead of Election Day.

While the actresses were looking to improve voter turnout overall, they were specifically targeting the Latino community on Sunday as they marched down in Little Havana.

“This cause of getting people out to vote is one of the most important things we can do as citizens,” Longoria told The Associated Press in an interview earlier in the day. “It’s our job.”

“We’re not out here as celebrities or actors or our professions,” said Ferrera. “I’m the daughter of immigrants, I am a true blue American, I bleed red white and blue.”

The group came together not only at the rally, but at a studio earlier also to film spots for various candidates. While the actresses are known for their Democratic leanings, they insisted the purpose was to get everyone engaged.

“I vote as an American and I’m out here rallying my fellow Americans to get out their vote because when we show up, our democracy will work better for us,” Ferrera said

The Latino vote is expected to be key in several races across the country. The actresses acknowledged that the bloc is not a monolith in terms of its ethnic makeup or its political affiliation.

“We’re Mexican, Dominican, Puerto Rican, Cuban, but we have way more similarities than we do differences,” Longoria said. “For me, it’s about finding that common ground, and not just with Latinos, but Americans.”

Added Saldana: “I think it is our duty to find our similarities, which are our great strengths, bind them together and use them as one voice to speak to the American public about the importance of representation.”

Dawson acknowledged that many Americans are dispirited by the tone of politics and may avoid the polls. She said she’s trying to encourage people despite the rhetoric of the day: “It’s so disgusting and it’s so disenchanting and disheartening.”

Still, she said she is undeterred.

“I have a 15-year-old,” Dawson said. “She doesn’t listen, she emulates, and if mom sits this one out, what is that really conveying to her?