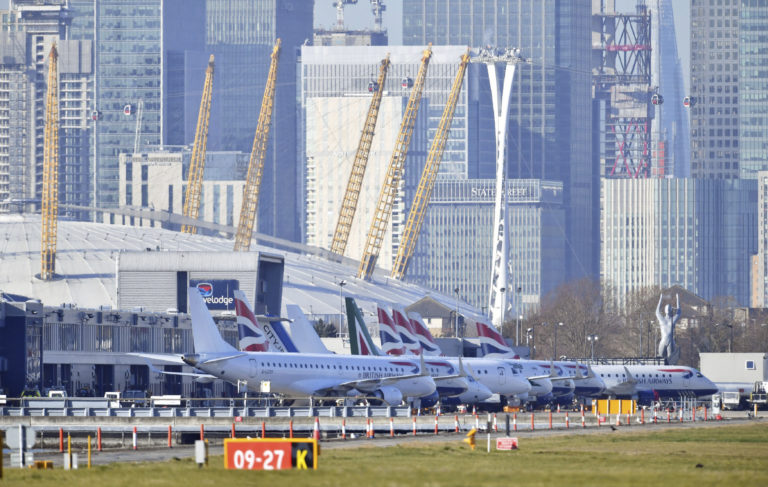 Planes on the apron at London City Airport which has been closed after the discovery of an unexploded Second World War bomb was found in the nearby River Thames, Monday Feb. 12, 2018. (Dominic Lipinski/PA via AP)

LONDON (AP) — All flights in and out of London City Airport were canceled Monday after a 500-kilogram (1,100-pound) unexploded World War II-era bomb was found nearby in the River Thames.

The Metropolitan Police service cleared an area within 214 meters (700 feet) of the bomb, including several residential streets, as officers worked with specialists from the Royal Navy to remove the device.

Police said the bomb was discovered Sunday at the George V Dock during pre-planned work at City Airport.

They described it as a 1.5-meter (5-foot) shell that was lying in a bed of dense silt.

“The first stage of the removal operation is to free the shell from the silt so that it can be floated for removal,” police said in a statement.

Local officials offered emergency accommodations to residents and said work to remove the bomb would continue into Tuesday.

Airport CEO Robert Sinclair said he recognizes that passengers will be inconvenienced but said the airport is cooperating fully with authorities “to resolve the situation as quickly as possible.”