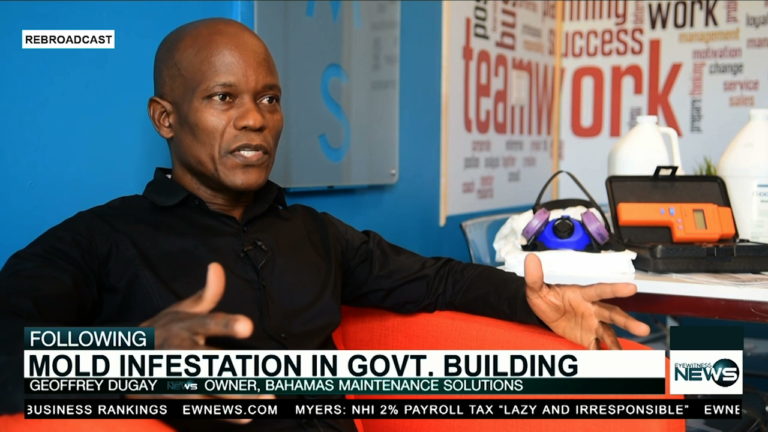 Mold infestation at a number of government buildings in the past few months has led to hundreds of employees walking off the job, but a local mold and asbestos expert suggested that government could easily avoid its current dilemma if it would employ general ongoing upkeep of its facilities.

Post office employees walked off the job at the General Post Office in May, meantime, nurses have been up in arms for months over the same issue.

Then just this week, teachers at C.H. Reeves Junior High School and employees at the passport office refused to work.

But, Geoffrey Dugay, owner, Bahamas Maintenance Solutions (BMS) told Eyewitness News Thursday that there is an easy fix to the vexing fungal growth.

“The simple explanation is that too many government buildings are in a rundown state and the easy fix is to simply maintain them,” he said.

“A lot of them have leakage and once you have moisture and any water leaking into the building, with the right temperature, the mold spores will germinate.

“They just need to maintain them. Any time you have any sort of water intrusion you need to address the problem right away. If there is a leaky room, you need to deal with that immediately.”

Dugay explained that it doesn’t take long for mold spores to germinate.

“Usually within 48 hours after having found the right environment and conditions, the spores will germinate,” he said.

“This is why it is so important in these government buildings for persons to identify problems and tackle them head-on.”

Once those spores get in contact with wet surfaces, it then begins to attach itself to organic items to feed on, Dugay explained.

“Things like sheetrock, wood, books, all sorts of organic stuff they will feed on. Once they become wet, within 48 hours the spores will actually expand two to three times. After that expansion, they will form little threads and as that continues to grow it begins to form the substances which you begin to see,” he said.

“At this point, health hazards are highly likely.

“They give off these micro-toxins and that is what affects some people with skin or respiratory problems.”

“The introduction of commercial solutions is necessary to ensure that is it done the right way. We come in with our protective gear, cordon off affected areas and then get to work,” he said.

Sources have confirmed to Eyewitness News that government has engaged in the process of acquiring a local company to commercially clean a number of its facilities which have recently made headlines for mold and mildew outbreak.