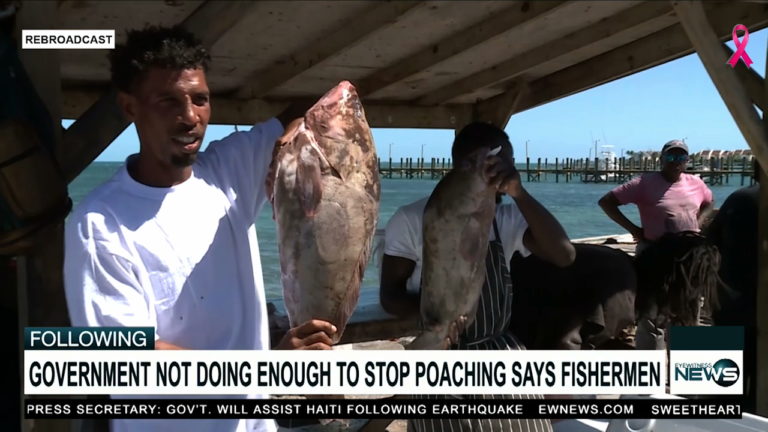 After a second group of Dominican fishermen were recently caught poaching in Bahamian waters, a local fisherman stationed on the Montagu Ramp expressed Thursday that poachers were increasingly affecting his livelihood and those of other Bahamian fishermen.

“It’s a problem,” said Milton McPhee, a fisherman who said poaching has been ongoing for decades and Bahamian fisherman are suffering.

“Poaching in the Bahamas is always at the forefront of the Bahamian fishermen’s mind,” McPhee said. “The lobster, the grouper and everything that comes from down south never makes it to Central and Northern Bahamas.

“The Dominicans and the Hondurans and the Cubans and everyone else; they come down in the mother ships that can carry 20 to 50 thousand pounds [of fish] at a time.

“They carry their conch, the lobster, the turtle, the shark, the sting rays, the octopus, nothing for them is not taken. Bahamians don’t fish that way.

“Bahamians for the most part, we target an area, and you would not have one fisherman killing out an area. Yes, we may move the lobster out of the area but we will leave the conch so the other guy can come and fish the conch.”

In fact, McPhee claimed that penalties are harsher for Bahamian fishermen than for illegal poachers.   “I think the government is trying but it leaves a lot to be desired,” he said.

“The penalties they levy against poachers isn’t good enough. I would propose that the first time you are caught you get a fine of $200,000 per person, that would shake them up and if they come a second time, you are our property, we give you life [in prison]. That will deter them but instead the laws are holding down the Bahamian fishermen.”

Last week Saturday October 13, 124 Dominicans were taken into custody after engaging in a shoot-out with Royal Bahamas Defence Force Officers moments after they were caught fishing illegally in Bahamian waters.

“It is tragic when you go into the hole and you see the amount [of fish caught] and the fact that so many of the lobsters have been undersized,” he said

“You can expect that we are going to continue to be aggressive. We are grateful to all our partners, all of the countries surrounding us, the United States (U.S.), and any other government who assisted us.”

Back in July, RBDF captured over 40 crewmates, charging each one $50,000 totaling over $2.3 million. Alongside the charge, the captain, Radhames Hernandez was convicted and sentenced to 18 months in prison.