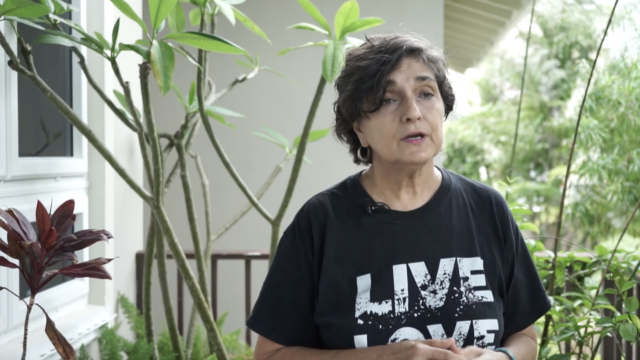 Environmentalists are continuing to raise the alarm over the plan to build Liquefied Natural Gas (LNG) facility in the heavily polluted industrial area at Clifton Pier.

Sam Duncombe, president of outspoken conservation group reEarth, said that the deal is wrong on every level, as it lags far behind the global trend of switching to renewables; is slated to be built at a site that needs urgent environmental remediation; and is being spearheaded by those who have an interest in keeping the Bahamas dependent on fossil fuels for as long as possible.

“Its the perfect storm of environmental abuse that will not only affect the present but future generations of Bahamians,” she said.

“It is honestly hard to imagine how a deal could be worse. This is a case of wrong time, wrong place, wrong people.”

Duncombe noted that at a time when the global trend is towards incorporating renewable energy into national power grids, with a view to decreasing reliance on polluting fossil fuels over time, the government has agreed to a deal that would see a long-term  ‘tri-fuel’ facility built.

“In other words, this facility will simply add another fossil fuel, Liquefied Natural Gas, to the two heavily polluting fuels that are already used at the Clifton Power Plant. Nothing is improving through this deal, things are actually getting worse. Why would the government agree to such a deal? Why not seek to build a facility that used LNG in conjunction with solar or wind power for example? Or better still a combination of biodiesel, solar, and tidal?

“As it turns out, the contract for this plant has been given to Shell, the chief supplier of these heavy fossil fuels to BPC, so it would seem that what has been touted as  progressive deal is really a way to achieve continued reliance on heavy toxic fuels into the distant future, to the benefit of those who profit from this arrangement.”

Duncombe noted that Shell Bahamas, which is owned by local entity FOCOL, already has a presence at Clifton and is among the companies thought to be responsible for the noxious oil pollution that has been allowed to occur in the area for decades. At the very least, she said, they have done little to mitigate the situation despite earning a great deal of money through their presence there.

BEC and Its oil suppliers have done little to mitigate the pollution notwithstanding oil pollution was the central issue in a lawsuit against BEC. It would appear that the stakeholders at Clifton are content to sacrifice environmental health as long as it results in personal wealth.

“Clifton Bay is an enormously delicate and important marine ecosystem and the land near the industrial plants is home to several small communities. For years, the ground and water have been saturated with toxic substances. There could not be a worse location for this facility. Clifton does not need another power plant, it desperately and urgently needs to be closed off and fully remediated before further environmental and human suffering occurs.”

Duncombe said the deal, the details of which have yet to be revealed to the public, amounts to a reward for those who have failed to prevent terrible environmental pollution for years.
The new LNG deal simply allows those same people to continue their regressive and dangerous practices into a compromised future. This is an opportunity for the good Dr. Minnis to prioritize the health of the nation.
“We cannot be sold out. This is not how it is supposed to be, ” she said.
“It’s supposed to be ‘The People’s Time’. Let’s make it happen!”