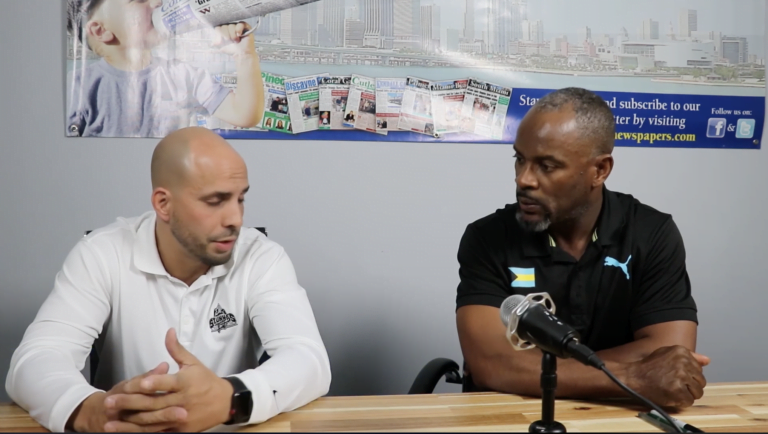 Minister of State for Disaster Preparedness, Management and Reconstruction Iram Lewis was a guest on Miami’s Community Newspapers talk show over the Thanksgiving weekend.

NASSAU, BAHAMAS – The completion of the government’s Family Relief Center on Abaco has been delayed until next year, according to Iram Lewis, Minister of State for Disaster Preparedness, Management and Reconstruction.

The minister discussed the impacts of Hurricane Dorian – which devastated parts of Grand Bahama and Abaco – and the government’s plans for recovery and restoration in the storm-ravaged areas.

The Category 5 storm left thousands displaced, with hundreds still missing and at least 70 dead – though officials project the death count to be “staggering”.

“We are looking at the first family relief center being finished within the start of the first quarter of next year,” Lewis revealed on the Florida-based talk show.

“Part of our projection was to have it done by the end of December, however there are certain challenges that were unforeseen, so we had to make some adjustments to the infrastructure, design and installation.

“What we want to do, we don’t have money to throw away, so the infrastructure we are putting in, we are designing it in such a way that when the temporary housing gets removed, we can now make it a permanent subdivision because the waters lines, the electrical lines and supplies will already be in position and it’s designed where it can be transformed from a temporary family relief center to a permanent subdivision.”

Lewis went on to note that the government would be looking at different models for Grand Bahama.

“We are looking for existing structures that perhaps can be repaired,” the Central Grand Bahama MP continued.

“Persons are looking at bringing in RVs that they can park on their properties while they are reconstructing.

“We are looking at perhaps some containerized homes. We have to look for resilience because we realize that we won’t be able to construct these neighborhoods prior to the next Hurricane season.”

Dorian, which was labeled the strongest storm on record to hit the Northwest Bahamas, pummeled into Grand Bahama and Abaco on September 1 – 3, packing maximum sustained winds at 185 mph, gusts over 220 mph and storm surges 18 to 23 feet above normal tide levels and higher destructive waves.

After the storm, thousands of residents were evacuated from the islands to New Providence where they were living in shelters.

According to the Department of Social Services most recent report on November 24, there were 585 shelterees living at the Kendall G. L. Issacs Gymnasium and Bahamas Academy Gymnasium.

Minister of Social Services Frankie Campbell has said that the government plans to have the shelters decommissioned before Christmas.

Lewis on Friday underscored that the shelters remaining open are “disenfranchising” the Bahamas’ Sports Federation.

“One of the major needs right now is that we are moving, from shelter to dwelling, persons who want to get back in their home,” he said.

“We want to get out of the hurricane shelters. You mentioned the gym that you visited in Nassau and one of the reasons why we must decommission that shelter is that because they are now disenfranchising the sporting federation.

Lewis put out a plea to Bahamians to offer to open their doors to evacuees staying in the shelters for the holiday.

“One of the things too that we are mindful in The Bahamas too…we are neighbors and we are our brother’s keepers,” he said.

“Those of us who have homes, we are taking in persons from the shelters, family members are taking in relatives, persons who have taken in strangers just to make it easier.

“And one of the things is you don’t want to be spending the holidays in the shelter.

“So we are doing our best to ensure those persons have a home or they are in some home during this festive season.

“So even to those from The Bahamas that might be watching, we are also appealing, open your doors, receive those who might be in a state of desperation right now.

“The whole intention is for the Bahamian government to find permanent housing. In the meantime, we are making best efforts to have temporary housing in place.”

He also called on the station’s  listeners to donate constructions supplies, so residents can begin rebuilding their homes.

“And of course, persons want to get out of the gym, they want to get into their private dwellings, so the great need now is for construction materials,” Lewis said.

“We are putting out the plea now for roofing materials, plywood, ice and water shield, asphalt shingles.

“On the interior sheetrock, durock, screws, nails and also electrical outlets because there was a lot of flooding, so a lot of those stuff were ruined, so right now we are in dire need of construction materials.”