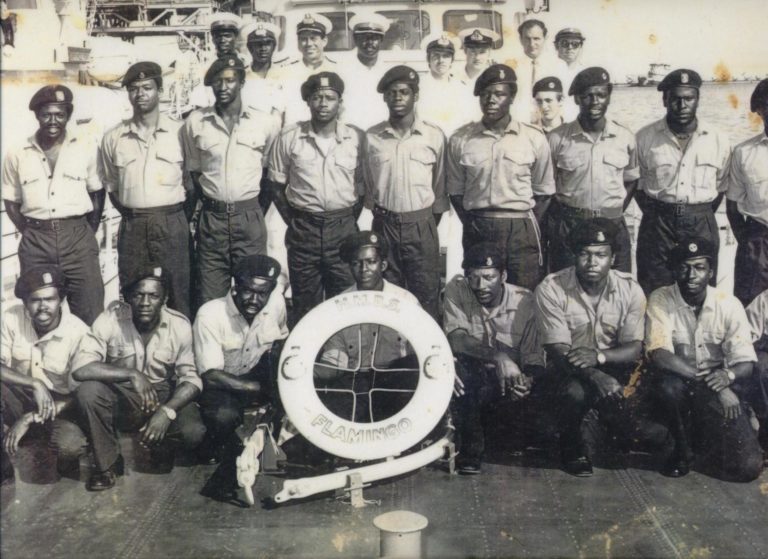 The initial crew of the HMBS Flamingo.

On the 41st anniversary of the tragic HMBS Flamingo incident, I wish to once again suggest, for the third time, a national honor most fitting for the only battle-tested heroes in our nation’s sovereign history.

May we never forget.

Forty-one cents’ worth of sacrifice.

But for the actual day, very many Bahamians from every single class set in The Bahamas have very little regard, honor or appreciation for the sacrifices given on that day.

It appears that we, as a nation bought by the stroke of a pen, are more caught up on the pomp and pageantry of being a nation than actually celebrating the things that have coined (sic) who we are as a people. We do not really mean the things we say when we mention the fallen, nor do we pay homage in any real way. What we discount and have discounted for years is that 41 years ago, four mothers lost their very young sons, the eldest being 24 at the time; also in the very same incident, several children lost their fathers and others lost their brothers who were out to sea defending the borders of this same great country

That is a debt that can never be repaid, and since in a young country it was such an isolated incident, one must wonder why not ensure that the families of the marines and a rising population see, know and understand that sacrifice and that a country only single digits older in years is forever grateful for the sacrifice?

You see in a town of lawyers and doctors, the sacrifices of soldiers may go unnoticed. There are no buildings named in their honor; there are no streets named after them. Sure, we named a couple boats after them, but those have long been decommissioned. It is our duty to ensure the memory of the sacrifice lives on and I do mean for longer than it takes for the prime minister and his ministers to blare (sic) to HMBS Coral Harbour and lay a wreath — which I imagine adds to the contamination of the sea — before blaring (sic) in the opposite direction, headed back to business as usual in a plush air-conditioned office somewhere to actively engage in battles of the mind and games like who could say the longest sentence to make a single point.

We must be deliberate about the honoring of the sacrifices of these men, and many men like them who have fought wars and sailed seas and gave equal to that of great men like Sir Winston — blood, sweat and tears. We must, in this the 48th year of this great Commonwealth, seek to, in a “people’s time” government, galvanize (sic) sacrifices of servicemen and give those following in the wake a burning hope to continue the march forward.

Dear editor, many things are happening in this year. The Flamingo incident turns 41 in the same year that the First Entry of the Royal Bahamas Defence Force (RBDF) celebrates 44 years since being enlisted and our nation turns 48. It is in this spirit and with this in mind, in the spirit of both reverence and celebration, that I put to the government and all in charge that the time has come to replace the Pisces, the Pineapple, the Sail Boat and the Star Fish. While I am sure they are all important, I still firmly believe they do not in the best way honor the human sacrifice of those who helped to make this place we call home a nation.

I would marvel to see this nation in a very real way give our boys 41 cents’ worth of a sacrifice for what they gave. In a wonderful commemoration of the 48th anniversary, in conjunction with the 44th anniversary of Entry One in the 41st year of the most tragic incident in our nation’s history to date, can we during the month of our independence see minted on the 25-cent piece Edward Williams; on the 10-cent piece Frenrick Sturrup; on the five-cent piece David Tucker; and on the one-cent piece Austin Smith? Would that be too much for a grateful nation to give?

What is their memory worth to us as a nation and as a grateful people? What is it worth to our patriotic value? Can we consider that honor in our quest to ensure that we will never forget? We have honored many who, by my estimation, didn’t give it all, but these men have; and as we did with the quincentennial dollar in 1992, maybe it is time we brought these boys to center stage and galvanize (sic) them into the fabric of this nation and into the minds of its people forever.

I am this time more confident than most times. After all, there is one of her majesty’s marines sitting in the Cabinet of The Bahamas; surely he must remember the sacrifice.

Bravo Zulu to the men of RBDF Entry 1