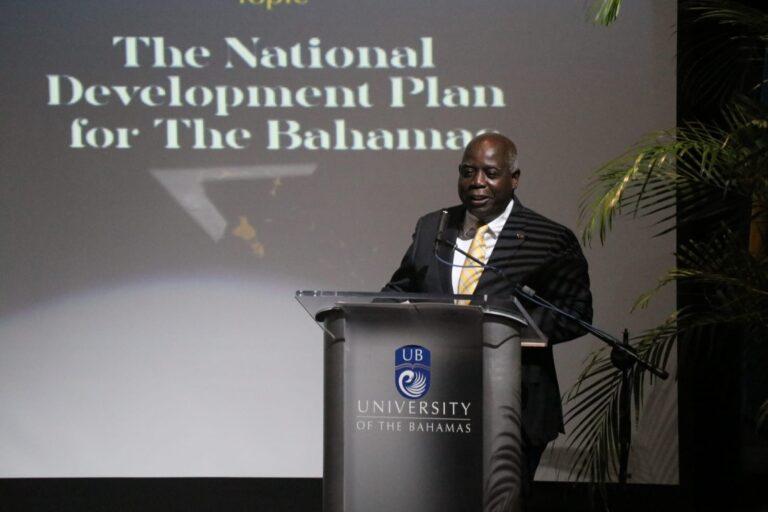 Prime Minister and Minister of Finance Philip Davis delivers a lecture on the National Development Plan of The Bahamas, on July 12, 2022, at the Meet the Policy Makers Lecture Series, held at the Performing Arts Centre of the University Bahamas. (BIS Photos/Eric Rose)

It is a common expectation here in The Bahamas and I am sure almost all around the world, that voters are accustomed to politicians and their allies making big and bold promises to them about high-browed plans to make their lives better while encouraging the economic and societal advancements of the nation, once elected. This is a sad refrain that has played out in our wonderful nation for successive decades ad nauseam.

We have had five Prime Ministers since Independence in 1973. The greatest one, so far, in my opinion, bar none, would have been the late great and deeply lamented, Sir Lynden Oscar Pindling. The man was a visionary and had a Messianic personality and traits. He knew almost instinctively what he wanted to bring about for all Bahamians.

He surrounded himself with a group of men and women who, initially, seemed to share in his vision and who worked in locked step with him to bring it about. Unkind persons viewed him with suspicion and suspected that he had dictatorial ambitions. Well, I do recall way back in the 1980s when Pindling proposed a National Youth Service.

His political opponents dismissed this suggestion out of hand and accused him of seeking to establish his own private army. He was laughed to scorn and demonized to the fullest extent. This idea was shelved and most of us have lived long enough to actually watched and witnessed the development and growth of the ‘armies’ of the gangs. These so-called ‘armies of the gangs’ have now morphed into the fabled Hydra or seven-headed monsters and are wreaking havoc and mayhem throughout the nation we love so much.

The other three Prime Ministers, God bless them collectively, would also have made multiple promises while seeking to achieve and secure political power. Ingraham was a workaholic. Christie was a pure showboater. He made promises that he must have known that could not be fulfilled in this lifetime. Minnis was a literal wrecking ball and purveyor of doom and gloom even before the antics, in my view, of the final days of his ill-fated interregnum.

He was merely holding the seat of PM warm pending the inevitable ascendency of the Hon. Philip ‘Brave’ Davis, QC, MP After Brave would have solidified his unchallenged leadership of the New PLP, following Christie’s unceremonious rejection by the electorate in 2017, he swiftly laid out a plan of action and agitation that brought about the calculated demise of the now rump FNM and it’s then maximum leader.

Brave, like all contenders before him, made numerous promises on the campaign trail. Unlike the bulk of them, he has, so far, kept close to 90% of what he committed to. He told and promised us that his incoming administration would stop; review and cancel the ‘bad deal’ with the Grand Lucayan Hotel over in Freeport. The FNM and Minnis spent countless millions of dollars purchasing the biggest white elephant ever seen in The Bahamas.

Minnis and his people then acquired a badly dilapidated and ran-down so-called airport that looked like a war zone for millions more. To this very date few, if anyone, knows what Minnis and his people spent and ‘wasted’ on these boneheaded schemes. We do know, however, that they made an absolute mess of both acquisitions. Brave had promised to fix both of them and he is now doing so. The so-called contract to sell the hotel has been brought to an abrupt end. The airport is currently been marketed by the Davis administration to attract serious and deep-pocketed partners from within the private sector. Promises made…promises kept.

Brave had also assured the people that once he and the New PLP were elected that they would review the data and statistics relative to the gradual reopening of the economy and our borders. Within weeks of coming to office, they have fulfilled these promises. The national economy is now booming to the extent where in certain sectors there are skilled labor shortages. Most able-bodies Bahamians, even in challenged Grand Bahama are able to secure a least one job while in some Islands, like Abaco and Exuma unemployment, is said to be in the single digits. Promises made…promises kept.

With the reopening of the nation, we have yet to see or feel the doom and gloom aspects of the dire predictions made by Minnis and assorted FNM Ministers of Health. Minister Renward Wells loves to preach and teach about ‘herd immunity’. He was rejected, wholesale, along with almost all of his then colleagues in the House of Assembly. Dr. Duane Sands, whom Minnis got rid of as Minister of Health, was badly defeated and mauled up in his ‘favored’ Lizzie. He is now creased up as National Chairman of the FNM, with no apparent shame.

Since the border restrictions were removed by the Davis administration, multiple millions of tourists have visited The Bahamas and I submit that there are millions more just across the bar panting to travel here. Hotels are packed to the brim. Passenger loads on aircraft carriers servicing The Bahamas are filled to capacity. All of our major airports are bustling and ticking like clockwork. Major airlines like Sun Wing and American Airlines are now back or soon will be in Bahamian skies. Promises made…promises kept.

Food stores while still challenged with availability and selectivity of some major favorite brands, are well stocked and prices, surprising, on some items have dropped dramatically, especially within the Super Value and Quality Food Stores. A big thanks to Mr. Rupert Roberts and his beloved daughter, Mrs. Candy Roberts-Kelly, Managing Director with distinction. Promises made…promises kept.

In opposition, the new PM and his team executed a Memorandum of Understanding with several umbrella trade unions and their affiliates. Brave promised them that their mutual interest would be better served if all relevant parties were onboard, jointly, for nation-building. He promised harmonious negotiations on critical labor issues.

Now, we just witnessed a historic industrial agreement being executed between the Davis administration and an educators union, that evolved out of the Bahamas Union of Teachers with generous benefits and salaries. Promises made…promises kept

While Belinda Wilson and Kemsly Ferguson (of another so-called umbrella union) are hosting wild cat walkouts and withdrawal of labor, despite pending legal matters) are breathing fire and brimstone, The Bahamas Nurses Union led by a very able President. also just executed a long-elusive three years contract, with generous benefits and perks. Minnis is a medical doctor so one would have assumed that he ‘felt’ the frustration; pain and suffering of our hard-working nurses within the profession.

Minnis dissed them, out of hand, are was wont to talk down to them like little children. Brave came into office promising a better relationship. Promises made….promises kept. Both of the above unions are affiliated with Mr. Obie Ferguson’s Trade Union Congress, less than a year into the Davis administration.  While others, who should know better, are jumping up and down like Jack-In-the-Box and making unacceptable and blatantly unnecessary threats.

Obie is bringing home, literally, the bacon and beef sausage for his affiliates. Messrs. Wilson and her affiliated teams did not sign off on the Memorandum and, in fact, vehemently denounced and deride it! Now, they are, for the time being, on the outside looking in; fuming and beating their cardboard chests. Promises made…promises kept.

What Brave and his administration have accomplished in a few short months, Ingraham, Christie, and Minnis found it difficult to bring about in all of the collective years that they would have been keeping the seat of prime minister warm for Brave, the people’s champion. More promises made are about to be fulfilled before the end of this blessed and productive month of August, The Lord Jesus Christ willing. Promises made…promises kept. Thank you Prime Minister.