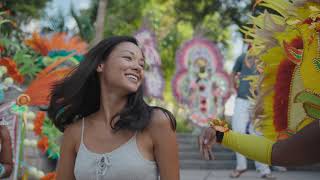 Fly Away, a mirrored name of Kravitz’s 1998 hit, was released in New York City (NYC) on Thursday at the eccentric Public Hotels to an audience of international and local media.

This is the first time in six years that MOT has released a new brand campaign, according to Dionisio D’Aguilar, Minister of Tourism and Aviation.

“If you don’t refresh, reinvigorate and relaunch then the product becomes stale and people wonder why should I go back there,” the tourism minister said.

“So, it’s very important for us to realize that there are 16 different destinations and what this new campaign does is tell people that the Bahamas is greater than what you think it is and if we can get people into our Family Islands; statistics show that repeat visits into those islands is huge.”

“We’re coming off an exceptional year in stop-over tourist arrivals and we have to keep that engine going. The American economy is doing very well and we felt that this was the right time to rebrand and relaunch the Bahamas.”

D’Aguilar said his ministry saw Kravitz, and one of his most successful tunes, ‘Fly Away,’ as a perfect fit.

“Music gets to the soul of people ad you hear a song and it transports you to a place and just the tag line and title of the song we felt that putting them together was a natural fit,” he said.

The tourism minister, while shying away from providing an exact price tag on the new venture, assured that the project was comfortably executed within MOT’s annual budget of $20 million dollars allocated for marketing spend.

Joy Jibrilu, Director General of Tourism, noted that Kravitz’s social media pull will provide MOT with even more traction that its marketing spend could have afforded.

“The fact that we are using Lenny and his social media reach is extraordinary,” she said.

“The fact that he has 40 million followers on his social media channels is amazing. He has committed to push this on social media and at his appearances and we are just so grateful for his passion that he is bringing to this.”

The Fly Away campaign features tourists and Kravitz enjoying clear blue waters, bonefishing, snorkelling and a number of other activities throughout various islands in The Bahamas.

The campaign has also produced separate feature vignettes which highlight Bahamians on various islands who provide historic stories about what makes their island so special.

Jibrilu said the aspect of storytelling dives deep into what truly attracts tourists to The Bahamas.

“They want to visit because of the deeper dive into the culture and they want to experience the stories that we are telling,” she said.

D’Aguilar chimed in, “for our visiting public we wanted to share with them that every island is unique and everyone has its own character and has something that is special; its people, its food – we wanted to ensure that everyone had its equal footing,” he said.

International marketing giant Tambourine has produced seven stories which are currently in circulation.

“They just finished up in Exuma and will be rolled out soon.”

Kravitz, who participated in a panel discussion with Jibrilu and D’Aguilar during the launch in NYC said, “what excites me most about this new campaign is the honour to represent my country.”