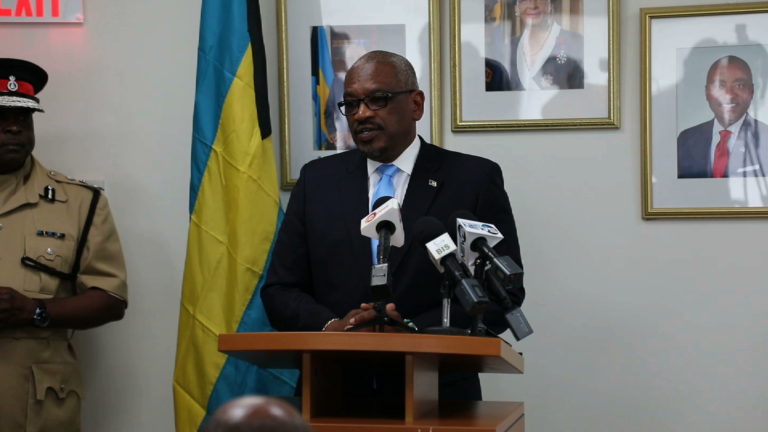 NASSAU, BAHAMAS – The commitment to amend the constitution of The Bahamas to limit prime ministers to two terms in office is still at the forefront of the Minnis administration, according to Prime Minister Dr. Hubert Minnis, who first made the commitment to push legislation to limit the tenure of the prime minister, whether consecutive or not, during the last campaign.

Responding to questions from the media at Government House yesterday, Minnis indicated that draft legislation has been prepared to deal with term limits of prime ministers, but it required additional revision before it could be released for feedback from the electorate.

“… It’s drafted at this particular time,” he said.

“There’s a few little tweaks we are doing to it, so I am almost certain that we should be tabling it very soon.”

Minnis had not committed to a timeline to introduce term limits, a measure that would require a referenda to be introduced.

At each occasion when questioned about the promise, the prime minister has repeated that he and his administration will fulfill its commitment.

He made a similar statement yesterday.

“I made a commitment of a two term limit,” Minnis said.

“We’re putting the legislation [and] brining it forth to the Bahamian populous.

“There are lots of other commitments we have made with respect to legislative changes and we will honor those commitments as much as possible.”

More than seven months ago, Minnis told Eyewitness News Online that the draft constitutional bills dealing with a term limit for prime ministers and a fixed election date could “soon” be completed and be made available for public consumption.

Following his keynote address at the Securities Commission of The Bahamas’ Public Companies Forum at the British Colonial Hilton, Minnis was asked about the election campaign, of which his response was, “very soon.”

At the time, he failed to provide a specific timeline.

While the prime minister did not expound on the bills or the process that would follow upon tabling them, he suggested the legislation could be tabled in the House of Assembly before the end of the year.

That did not happen.

Ahead of his trip to the United Nations’ 73rd General Assembly in New York last September, the prime minister indicated that the bills would be tabled within two weeks.

He also said Cabinet will begin advancing those discussions beginning in October.

“We made a commitment that we will bring in term limits and we will do that,” the prime minister said last October.

Opposition Leader Philip Brave Davis has expressed support of a fixed date for general elections, but does not support term limits for prime ministers on the basis that it represents a threat to democracy.

As it relates to the government’s intention to introduce term limits, Davis said, “Democracy requires the will of the people, in its fullest expression to be carried out.

“Are you going to now trump that by telling the people that if they want someone to serve as prime minister for more than two years that, that cannot happen because of an act introduced by Parliament?”

In the Speech from the Throne, the government said, through a referendum, it would introduce term limits for prime ministers; introduce a system of recall for non-performing members of Parliament and constitute an independent Electoral Commission and Boundaries Commission.