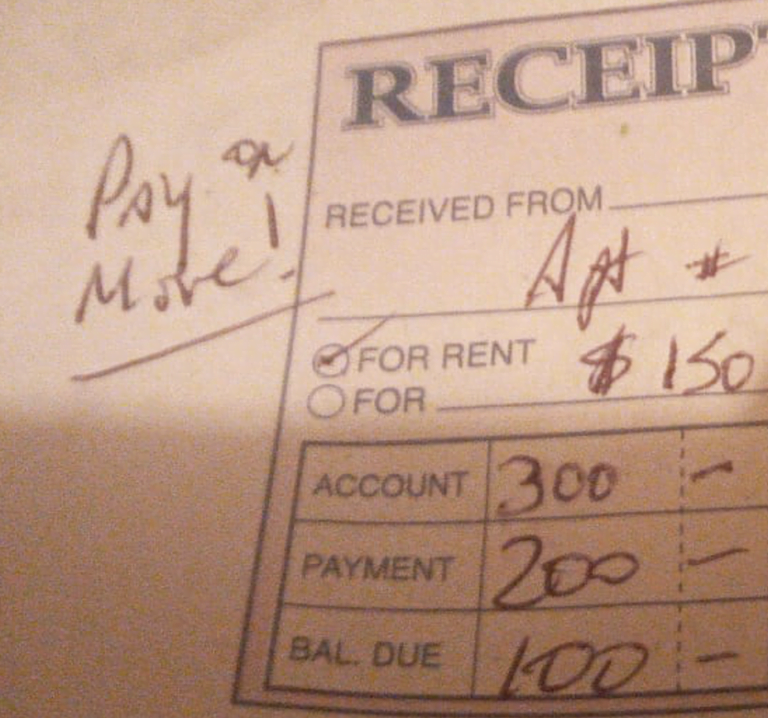 NASSAU, BAHAMAS — After shouldering six long weeks of unemployment due to the country’s coronavirus shutdown, and delays in government assistance, a 25-year-mother of two is facing eviction.

Alexis Thompson shared her harrowing story with Eyewitness News on the condition of anonymity and her name has been changed.

Thompson said after being sent home on March 15, she quickly exhausted her meagre savings and now fears her family will have to return to a homeless shelter.

While she has applied for relief from the National Insurance Board and Social Services, she has yet to hear back from either agency.

At this point, she said she simply does not know what to do.

“I does try but that ain’t enough,” she said.

Thompson explained that last week things got worse when she was no longer able to pay her rent.

She said after barely scraping together enough to make a payment, her landlord gave her a receipt indicating her $100 balance and an ultimatum.

According to a receipt provided to Eyewitness News, Thompson had missed a payment on April 12 but planned to settle arrears the following week.

She reportedly provided her landlord with $200 on her $300 bill, but when she received the receipt for payment, a note on the corner of the slip read “pay or move”.

Thompson said she was shocked and hurt to see to the message scribbled on her receipt given that she has always been a “good tenant”.

She said after receiving the frightening and threatening note from her landlord, she immediately went to NIB to check on the application she had put in since March 30.

However, after toeing a line of more than 40 people just to get to the customer service desk, Thompson said she was told that her claim could not be located and she would have to resend her information again and restart the process.

But this is something she does not have the luxury to wait on, she stressed.

“I can’t afford to restart the process,” she insisted.

“I’m showing them proof of my email where I sent it, where I received the automated response from NIB and they don’t take none of that into consideration. All I’m hearing from anybody at NIB is to resend the stuff and restart the process.

Thompson said her sense of urgency is centered around the fact that come Sunday, when her landlord makes her routine stop at her home, she won’t know what will happen.

She claimed that her landlord comes to the house every week to collect rent and always has a police escort– even during the recent weekend lockdowns.

“If I owe her $100 before Sunday and we have lockdown again and this another Sunday coming, I don’t even know what to expect this Sunday because I’m still in the place and I don’t have no money for her,” she said.

“…That’s why I went to NIB to try to figure out answers for Sunday. Now we go on lockdown [today] and Sunday she still coming with the police and I have no answers for her.”

The young mother noted that she has been trying to hold it all together, but she does not know how much more she can take.

“I keep trying to force myself not to have a meltdown,” she said.

“You’re trying to stay sane. My boss keeps telling me May 1, so I’m just trying to pray and hope that May 1, I actually go back to work.”

Her voice cracked and she stopped short of tears as she recalled her three-year-old son watching her cry and asking her what happened.

“I have to find groceries when they do lockdown,” she said.

“You have to feed your kids. You have to pay light, BPL still emailing me. I have a lot on my shoulders and only me dealing with this.”

Last month, the government declared a state of emergency was declared, closed down the country’s borders and implementing a nationwide curfew and lockdown in order to slow the spread of the virus.

Business establishment across the country were ordered to work from home and those that could not were forced to close.

The tourism industry remains at a standstill and thousands of Bahamians have become unemployed.

But Thompson said officials don’t understand what people like her are going through because, “they don’t have to worry about survival”.

“I can’t tell my landlord that,” she said.

“I cannot find nothing in the house. I have no source of income and I refuse to be homeless again.”

Since becoming a teenage mother at 15, Thompson said she has worked long and hard to provide for her family and achieve stability.

She said she lived at the Bahamas Great Commission shelter and the South Beach shelter until she was able to get a stable job and does not want to go back to that life.

“I am trying but the system in The Bahamas refuse to let you win,” the 25-year-old added.

“I soon ready to give up trying but I can’t because of the two kids.

“…It’s like you getting hit from every angle and you don’t know what to do. That’s how I feel.”

Amid the daily struggle for survival, Thompson said she is also burdened by the fact that her 10-year-old daughter is not able to do her classes at home simply because she has no access to a computer.

She admitted she has not told her daughter that classes are available online because she does not know how to explain to her child that she will not be able to participate.

Thompson said she is plagued by thoughts that she has disadvantaged her children because she cannot provide them with what they need at this time.

She told Eyewitness News she simply wanted to vent, and felt the need to be heard.

Do you have bank info for her for people who want to send a little cash to help? Also MOE now has some classes on cable hopefully her daughter can utilise those.

What is her banking information

Can i have her banking info or telephone contact.

Can I have her banking iformation or contact pls

Send the banking information,so we can help her

Can i get a contact for this lady pls

I don’t have much, but how could assist please. Thank you

It looks like after sharing her story there seems to be people who are touched to help, but am thinking how many other people out there in the same situation ?

Need her contact information so I can help her.