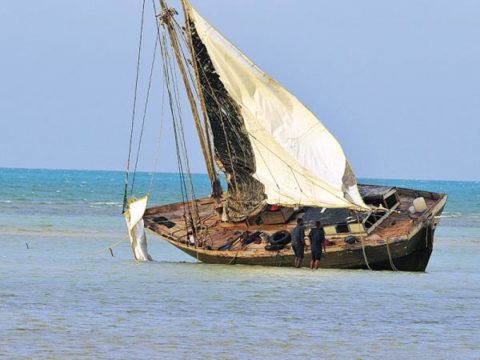 Above is the wooden Haitian sloop, which landed in the Southern New Providence area last week. Some 28 Haitian migrants were apprehended after law enforcement officials conducted an extensive search of the Marshall Road and Coral Harbour areas.

The Royal Bahamas Defence Force (RBDF) is currently enhancing its detection, tracking and interdiction capabilities according to RBDF Commodore, Telis Bethel, who expressed concern for the recent landing of a Haitian Sloop in the capital on Friday.

A subsequent search by RBDF marines resulted in the apprehension of 25 more illegal migrants and the discovery of a wooden Haitian sloop.

Commodore Bethel said a Board of Inquiry has been convened to investigate that landing.

His comments came during an inspection of the officer platoon at the Coral Harbour base on Friday.

Last year, the defense force was heavily criticized after two illegal sloops landed within a few miles of its base less than one month apart.

Despite those landings, Commodore Bethel said 1,300 migrants were apprehended in 2017.

He said plans are already underway to acquire an island-wide ‘Motorbro’ radio communication system and an Automated Identification System to better identify foreign vessels in our waters.

The programs are being funded by the US State Department.