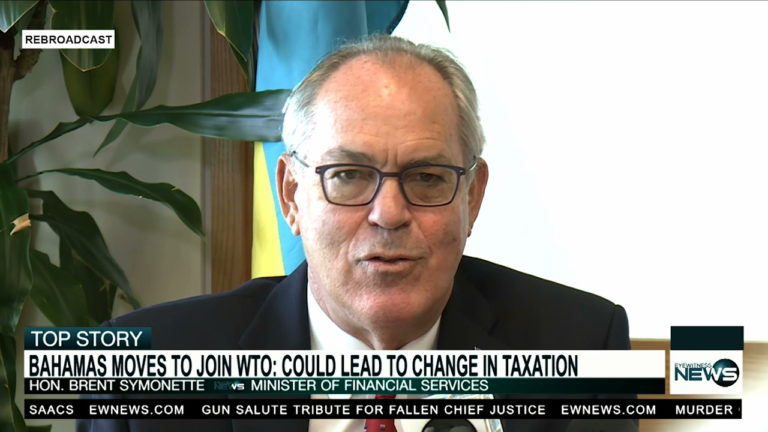 Minister of Financial Services, Trade and Industry and Immigration Brent Symonette held a press conference on Sunday at the Campbell Maritime Centre to provide an update on the country’s current accession to the World Trade Organization (WTO) Accession.

According to Symonette, these and other benefits such as higher employment, expanding Bahamian ownership in the local economy and increased shared prosperity, all could lead to faster economic growth.

Symonette continued, “once we [The Bahamas] comes out of that first stage of negotiations, we will know whether there will have to be any tax adjustments or whatever.  I think that’s a fear we don’t know yet because we are moving from customs duty to a value-added tax (VAT) based economy; we’ll see how it works after these negotiations.”

Symonette also announced during the briefing the appointment of former Minister of State for Finance Zhivago Laing’s as the Chief Negotiator of The Bahamas’ accession to WTO succeeded Raymond Winder, who resigned as Chief Negotiator back in July.

In 2001, Laing first introduced the idea that The Bahamas should join the WTO to enhance the country’s purchase power and growth and development.

“The government is confident that Mr Laing is well suited to lead accession negotiations and ensure the terms of WTO membership is mutually beneficial to The Bahamas and WTO members,” Symonette said.

According to Laing, supporting the Minister of Financial Services concern about taxes and customs duty potentially increasing, he [Laing] indicated that it will find a way to balance itself out.

“Under a WTO system, you are being asked to gradually reduce your Customs Duty as a barrier to trade. That doesn’t mean that you are introducing higher and more taxes to replace that, it just means you are shifting where you are going to raise those revenues.

“From a business point of view, it’s a freeing up in capital to be used for other purposes.

Cementing that this WTO delegation will work for The Bahamas, Symonette also stressed that these are “just negotiations” and if the deal is not in the best interest of The Bahamas, “we will not be joining the WTO and this will not mean an influx in foreign businesses,” Symonette confirmed.