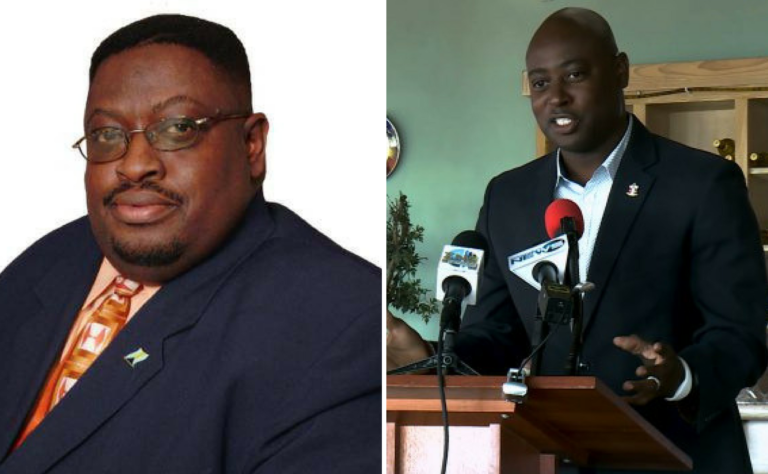 From left: Director of Labour, Robert Farquharson and President of the Bahamian Contractors Association, Leonard Sands.

There are not enough contractors with specialized skills registered at the Department of Labour (DOL), according to Labour Director Robert Farquharson.

In an interview with Eyewitness News on Friday, Farquharson encouraged qualified Bahamians to register with the department in order to be “eligible” for “opportunities” that may arise.

His comments came one day after an executive of  China Construction America (CCA) – developers of The Pointe said, there are currently not enough specialized Bahamian workers to complete its current stage of construction.

President of the Bahamas Contractors Association (BCA) Leonard Sands however, told Eyewitness News in a phone interview, that he finds this excuse by CCA on The Pointe, “laughable”.

“Well if the BCA has information on people who are qualified, then they need to provide that information to us,” Farquharson said of Sands’ interview.

“The minister said that is what The Pointe said, and I will not add or (subtract) from the statement.

“The Department of Labour has a data base that is filled with contractors. Those contractors with specialized or specialty skills need to register with us. We do not have enough registered contractors with us, who have outlined their skills, and the ones who have, I cannot say what skills they have.”

After speculation began to mount last month, over whether The Pointe was in breach of its contract with respect to agreed labour ratios, the DOL launched a formal investigation.

According to a report compiled by the department and released on Thursday, there are 73 non-Bahamian workers and 24 Bahamians presently on site, despite the fact that the heads of agreement (HOA) calls for a 70 per cent Bahamian and 30 per cent non-Bahamian workforce.

Labour Minister Dion Foulkes said however, that his Ministry has concluded that The Pointe is not in breach of the HOA.

In a statement released to the press Thursday, Foulkes said, he met with Daniel Liu, president of The Pointe, his vice president and legal counsel on Wednesday.

“The explanation noted is that the present stage of construction, representing the second phase of The Pointe development, is the erection of the superstructure,” Foulkes’ statement read.

“This requires specialized post tension concrete structure workers to complete this phase in a very short time frame. Qualified Bahamians have and continue to be sought. In the following phases, substantially more Bahamian workers and contractors will be engaged in order to comply with the overall 70 per cent Bahamian and 30 per cent non-Bahamian workforce composition. The Pointe development construction is scheduled to be completed in the second quarter of 2020.

“With factors related to the technical aspects of the present construction phase and the expected long term buildup of Bahamian workers, the Ministry of Labour has concluded that The Pointe Development is not in breach of the heads of agreement.”

The Pointe is expected to employ 500 full time works when completed, according to the statement.