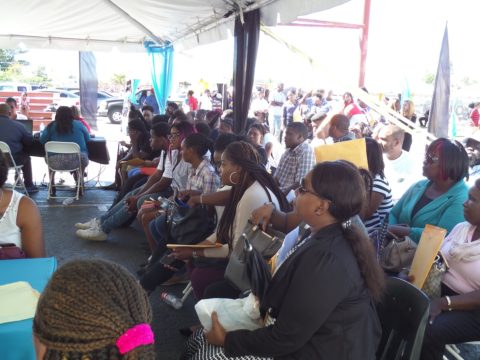 Job seekers attending the most recent Labour on the Blocks initiative, which was held in Grand Bahama over the weekend. (PHOTO: MINISTRY OF LABOUR)

A proactive programme, ‘Labour on the Blocks’ is among the initiatives officials believe will help put a substantial dent in the country’s unemployment figures.

Director of Labour, Robert Farquharson, is pleased with the progress his department has seen since the inaugural event was held back in January in the Bain and Grants Town areas. Corporate partners including Baha Mar, Atlantis and Enviroscape were all active participants.

“Enviroscape hired 30 persons on that day,” said Farquharson. “In addition to those 30 persons, they are still looking for additional staff. Atlantis saw some 143 persons who visited their desk. they confirmed employment, i think to date, for 43 persons. Baha Mar saw 186 persons and all of those 186 have been interviewed and been considered for employment.”

For persons interested in attending the next event, a valid passport, voters card or driver’s license along with your National Insurance card and a resume will be required for processing into the Ministry’s database.

The next Labour on the Blocks event will be held February 24 at the park opposite Golden Gates Assembly Church on Carmichael Road.