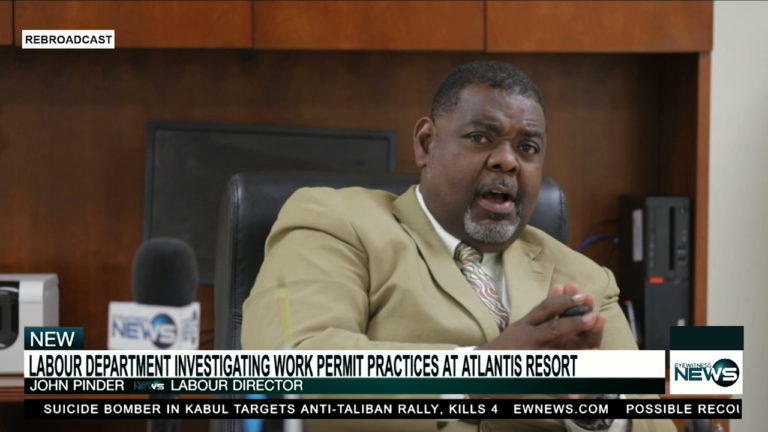 An investigation of The Atlantis Resort for an alleged breach of the labor laws is on-going, confirmed Labor Director John Pinder on Monday.

In an interview with Eyewitness News, Pinder disclosed that that the Department got several concerning reports indicating that a company contracted by the Paradise Island resort reportedly provides foreign labor to fill positions where needed.

“There is an employer who has these persons here in The Bahamas who are foreign nationals, that when someone calls in sick they would have these people waiting to call them up to fill certain positions,” Pinder claimed.

“I want to send a very stern warning to the person who is doing that. If your work permit brings you in this country to be a handyman who cleans yards or weeds yards, you should not be in the hotel in the kitchen cooking or washing pots. We make it very clear on the forms what the description is.”

The Labour Director stressed that employers are not allowed to form a work scheme of their own and fill those voids with foreign labor without following the prescribed protocols.

“It’s called the black and white plan, so if someone calls in sick instead of giving that overtime to another employee, they call in the foreign workers who wear the black uniform to fill in,” Pinder explained.

“You can’t work for another company if an individual applies  for you. You are only supposed supposed to work for that individual. People need to know that they are at risk and work permits can be suspended, revoked or cancelled.”

Eyewitness News reached out to executives of the Bahamas Hotel Catering and Allied Workers Union for comment but they declined to comment until the investigation is completed.

Attempts were also made to reach officials of the Atlantis Resort but our calls were not returned up to press time.