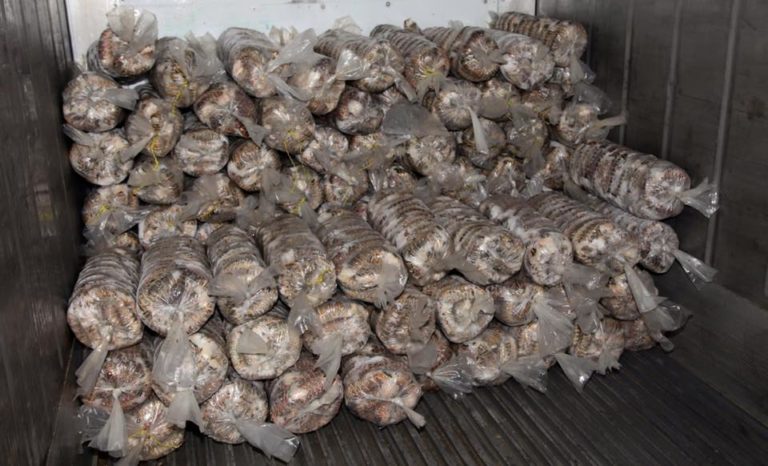 Fish recovered from poachers in 2018. (FILE)

“It’s really good they made the arrest; that boat has been cited and reported a number of times”

NASSAU, BAHAMAS — The Bahamas Commercial Fishers Alliance (BCFA) has lauded the recent arrest of five Dominican poachers while stressing that poaching remains a serious concern for the industry.

The Ministry of Agriculture and Marine Resources, in a statement yesterday, noted that five Dominican fishermen were arrested aboard the vessel “Amanda” this past Sunday. The vessel was reportedly apprehended around 11pm on Saturday by the HMBS Bahamas in waters near Diamond Pint, Southern Great Bahama Bank.

Adrian LaRoda, the BCFA president, told Eyewitness News: “It’s really good they made the arrest. That boat has been cited and reported a number of times. I guess they finally caught up with them.

“It is also my understanding that some crew escaped but were caught by the Cuban navy.”

LaRoda added: “There is always serious concern about poaching and honestly these guys are very crafty. That is a lot of product they had in their possession.”

Laroda noted that the 2021/2022 crawfish season has been going fairly well.

“The season started off good and we will see how things go for the next few months.”

Minister of Agriculture, Marine Resources and Family Island Affairs Clay Sweeting, in the statement, expressed deep gratitude to the officers of the HMBS Bahamas for their bravery in protecting Bahamian waters from illegal fishermen intent on causing harm.

“I appreciate the hard work and bravery of these men and women in uniform as they guard our heritage and I particularly applaud the deep cooperation between the RBDF and Bahamian fishermen who often are the ones to spot these illegal boats in our waters,” said Sweeting.

He added: “I wish to encourage our fishermen to maintain the open dialogue between our law enforcement agencies as well as the Department of Marine Resources as we work hand in hand to guard our heritage.”