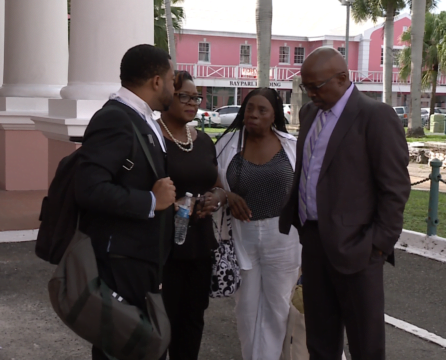 Shane Gibson and members of his legal team outside of the court.

NASSAU, BAHAMAS — Shane Gibson, who is accused of receiving $280,000 in bribes from contractor Jonathan Ash, told investigators when he was questioned at the Central Detective Unit that while he could not speak to what Ash and his associate Deborah Bastian did amongst themselves, he never asked anyone for money nor did he receive any.

The Supreme Court jury was played a video recording of Gibson’s August 2, 2017, interrogation at CDU yesterday.

The interview was conducted by Assistant Superintendent Deborah Thompson who took the stand for the prosecution on Monday.

Gibson, 58, is accused of receiving the bribe money from Ash between mid-January 2017 to and March 2017, in order to induce payments for work done as part of the cleanup following Hurricane Matthew in October 2016.

He was given ministerial responsibility of the National Recovery and Reconstruction Unit (NRRU) in the aftermath of the storm.

Gibson told investigators while he had no clearly defined role he was responsible for oversight of the restoration effort.

When asked if he was responsible for processing payments for contractors, Gibson said he was not.

He said minister do not process payments, but the Ministry of Works set the rates and sent them over to the NRRU, which would in turn sign off on work and forward the payment requests to the Ministry of Finance.

Gibson admitted the NRRU tried to reduce the rates of payment for work on several occasions as it believed the ministry’s rates were too high, but the unit was instructed by Cabinet to maintain the established rates.

He also told investigators that the Ministry of Works identified contractors and placed them on stand-by ahead of the storm, a process he said he was not involved in.

Thompson asked: “In respect to NRRU and NEMA, what was your specific function?’

Gibson responded: “I never got specifics.”

Thompson asked: “What did you do?”

Gibson answered: “I had ministerial oversight, but in terms of day to day…”

“Did you know a Deborah Bastian?” Thompson asked

Gibson said he did.

He confirmed she was a consultant and worked under the NRRU.

The investigator said she was made to understand Bastian was made responsible for processing all payment and submitting them to Gibson.

“Is that so?” she asked. “I also have information that you changed the process of payment being submitted to the Ministry of Works and directed all payments be directed to Deborah Bastian.”

Gibson replied: “No. Ministry of Works always did that.”

He was also asked whether he knew Ash, the prosecution’s key witness who gave testimony last month.

Thompson sought to clarify: “You know him?”

He answered: “If I see him, I could talk to him. I don’t know him as well as I know you (referring to his attorney Owen Wells), but I know him.”

When asked to describe his association with Ash, Gibson repeated that if he saw the man he could have a conversation with him.

“I know him at a certain time,” he continued.

“I knew him long after he had started working for us.”

Investigators pointed out that Ash was owed over $1 million by the government at one point.

Gibson claimed he did not know how much Ash was owed.

Thompson asked: “You wanted to meet Jonathan Ash to ask about high amount of payments and to determine the payments owed?”

Gibson responded: “I don’t remember all. I always had a concern about the rate sheet. I tried to see how we could negotiate the rates. The work was just massive.”

Gibson confirmed he and Bastian met with Ash and the three had a discussion, though he could not recall specifics or whether he questioned the contractor’s work at the time.

When the investigator suggested to Gibson that he and Bastian asked Ash for payments during a meeting in order for the funds to be released, Gibson stressed: “Absolutely not. Absolutely not.”

He said: “I have never asked Jonathan Ash or anybody.”

Thompson said she had information that Gibson told Ash he would have to forgo one of his payments in order to be paid the funds owed by the government.

But Gibson maintained: “I don’t remember those details.”

The assistant superintendent said she had information that following that meeting Ash met Bastian and Commonwealth Bank in Oakes field “where he gave her $50,000 cash for your benefit representing part payment for your assistance with his payment”.

Gibson said: “I can’t speak to what Ash and Debbie did.”

Gibson denied that he met Bastian near the gun range for the purpose of receiving money on Ash’s behalf or that Ask paid him $250,000 between January 2017 and April 2017.

Gibson said he met Bastian at different locations but never for the purpose of receiving money.

Thompson told Gibson that being concerned with another he used his influence as a minister to target payments from the contractor.

He replied: “I have never, ever asked Deborah Bastian or Ash directly or indirectly for money.”

She asked if he had received $80,000 for inducement of Ash’s payments.

She pivoted, saying: “You said you never asked for Ash for money. Did you ever receive money from or on behalf of Ash from Deborah Bastian? If so, what was the reason?”

After briefly speaking with his attorney, Gibson responded: “No comment.”

When Thompson said she had information that Gibson demanded shingles, which meant cash, as inducement for his assistance, the former minister repeated ‘no’ three times.

The trial continues today at 10 am.