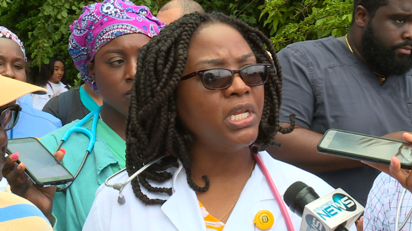 Speaking to Eyewitness News Online, Bassett said after months of writing to the PHA to determine when those doctors will be made permanent, the union has learned of the intention to disengage them weeks before Christmas.

When contacted, Minister of Health Dr Duane Sands said no junior doctors have been fired; however, he did not confirm or deny whether a determination had been made on their status.

“We have fired nobody, we are not firing anybody,” Sands said.

“This is decidedly a misinformation campaign.”

Basset said this was a “classical, coldhearted stance” that has become synonymous of the PHA and the government stance toward the union.

“This is the evidence of that right now,” she said. “They are looking to fire at least 20 doctors at Christmas time — not just fire them, but they wait until Christmas to do so.

“These are junior doctors that would have been employed since July, operating in the capacities that they are operating now.

“They refused to give them a contract, refuse to hire them, but kept them lingering on all of this time without paying them at the rate they should have been paid; and now, weeks before Christmas, they tell them they won’t have a job.

“And not just that; by the 23rd [of December] they will let them know. Who does that?”

Bassett said the treatment of the junior doctors reflects poorly on the government, which she said has continued to “ruin this country and drive young minds out of it”.

“This is their modus operandi,” she continued.

Asked what the union plans to do, Bassett said: “Right now I am started to fast and pray that God will move these people. It is going to take an act of God to get these people out of the positions that they’re in because they have no sense of who God is, so that is my recourse right now.”

After junior doctors withdrew their labour in August primarily over matters related to holiday pay owed to them since 2014, the government counteracted the strike action by applying through the courts for the matter to be referred to the Industrial Tribunal.

Yesterday, Bassett said: “The minister, from he came into office kept saying that he can’t pay doctors, but will not say how else he is trying to cut cost and cut expenditure.

“They have shown no fiscal responsibility when it comes to travel and going places, and staying in five-star hotels when they go on their conferences and taking the largest contingent compared to any country.

“They have not done anything to show restraint, but yet they want to cut jobs for young Bahamians.

“This is a poor example and a poor excuse for a government that came in on the slogan ‘Bahamas for Bahamians’,” she added.