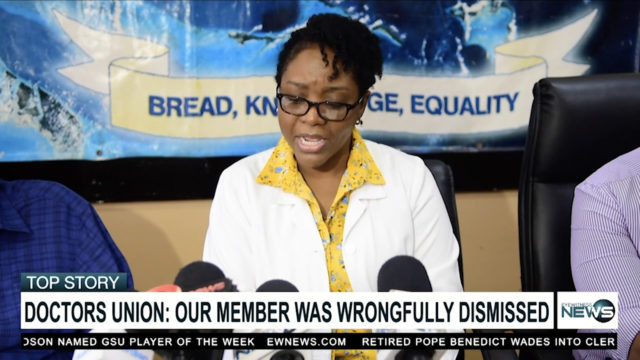 NASSAU, BAHAMAS – President of The Bahamas Junior Doctors Union, Melisande Bassett, on Friday called on Minister of Health Dr. Duane Sands or Prime Minister Dr. Hubert Minnis to intervene and address the alleged dismissal of a fellow physician who serves on the union’s executive board.

Bassett also claimed that this was not the physician’s first run-in with administration.

“In 2018, he was called in to a supervisor’s office at the Department of Public Health and he was accused of stealing. No evidence was given,” Bassett alleged.

“Later, the same physician was targeted by the same supervisor and had his annual confidential report shared with the medical counsel illegally. After he questioned this, and through his lawyer sought redress, this termination letter was produced.”

On Friday, Bassett said if anyone can show just cause as to why the doctor was allegedly terminated or produce any evidence, the union will refuse to remain quiet.

Bassett claimed that administration is abusing their power.  Her comments echoed those of Bahamas Nurses Union (BNU) president Amancha Williams who made the same claim to the media some two weeks ago while airing the BNU’s concerns.

“Why is it that in the 21st century this government is allowing people that they appoint to control and manipulate people on a whim and they use their positions and their authority to do this,” Bassett asked.

On Friday, Minister of Health Dr. Duane Sands was contacted for a comment about the alleged dismissal but he said that he was unaware of it.

Meanwhile, Bassett said the union is willing to take every legal means available to get the issue rectified.

When asked if this legal action includes a possible strike vote, she reiterated, “every legal means.”