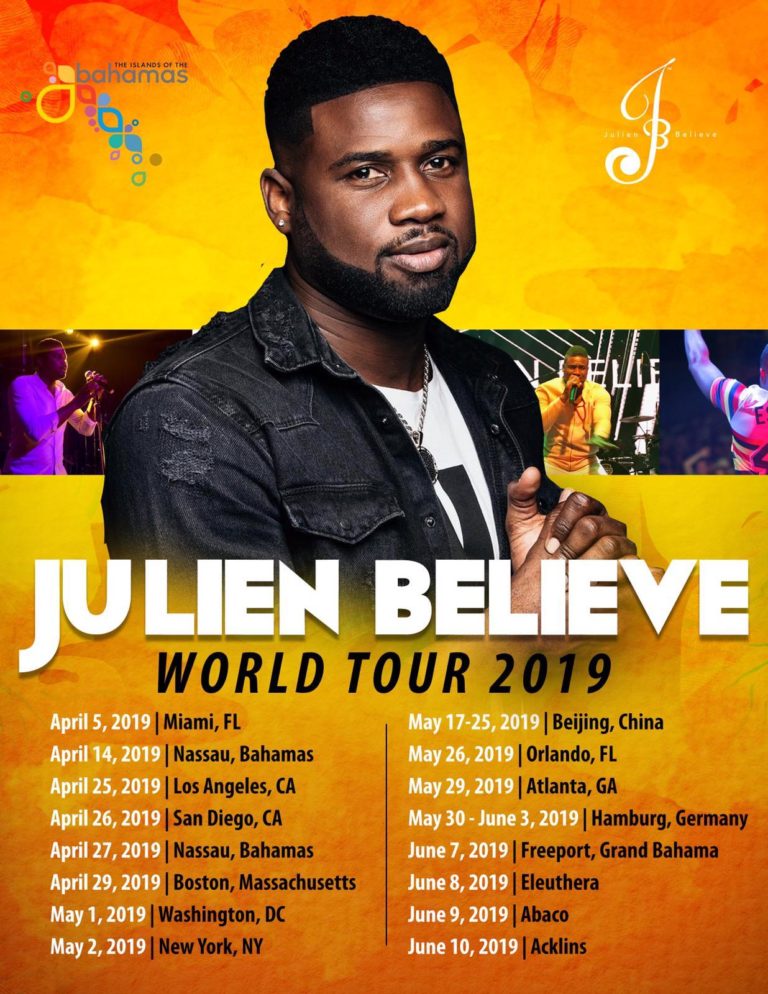 NASSAU, BAHAMAS –  Bahamian singer, songwriter and producer Julien Believe has once again elevated his music career by embarking on his biggest world tour to date.

The Julien Believe 2019 World Tour kicked off in Miami, Florida on April 5th and stops in Los Angeles, San Diego, Boston, Washington, New York, Orlando and Atlanta.  Beijing, China and Hamburg, Germany are also on the calendar as well as his beloved Bahamas where he will perform in Nassau, Freeport, Eleuthera, Abaco and Acklins – altogether over a 9 week span.

“One of my exciting world tour moments will be performing in Hamburg, Germany at the Rotary International Convention at the end of May where the current president, Barry Rassin who is a Bahamian, will be finishing his presidential term,” said Believe. “President Barry has requested the showcasing of Bahamian culture and entertainment, and I am excited to be part of the line up and be able to perform for the more than 24,000 Rotarians from around the world.”

The dulcet singer, innovative songwriter and creative music producer is not only an ambassador for The Bahamas but is also an international, award-winning entertainer, who continues to blaze trails within the entertainment industry worldwide. Breaking down barriers, Believe has accomplished things that many artists dream about. Scoring major collaborations with 10-time Grammy Award winner John Legend, Dancehall legend Beenie Man, Soca King Bunji Garlin and much more. These achievements have earned him great admiration in the Caribbean and International music scene.

A hallmark in Believe’s long list of performances was his electrifying performance at the Miss World Pageant in Sanya, China marveling a live audience of thousands, and millions of viewers globally. Around the world, Believe has performed in the Notting Hill Carnival in London, Hollywood Carnival in Los Angeles, BET Awards Pre-Party, and across the US, Mexico, and the Caribbean. His career path has afforded him countless opportunities that has and continues to mold and shape the charismatic performer in all aspects of his career enabling him to amass an impressive resume of music credentials; making him the only Bahamian artist to achieve these accomplishments.

Believe has stated that, “It’s always a pleasure representing the country globally as a music ambassador. It’s a good feeling knowing people from all over the world can be immersed in our culture through my music. It’s important to expand my horizons and ensure I do different things to get different results. Growth is key! I’m all about new places, new people, new horizons and most importantly, new experiences.”

Believe is currently collaborating with music producers in LA for an upcoming album set to be released in the summer.  Be sure to check out his current hits on YouTube and you can follow his 2019 World Tour journey on all social media platforms.

This article was written by Petra Haven and Azaleta Ishmael-Newry.