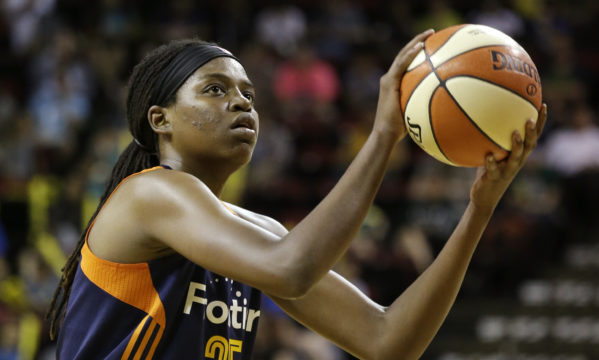 Jones led Shanxi to the league finals earlier this month, but she and the Flame were swept 3-0 by Beijing.

In an interview at home over the weekend, Jones said, she’s looking to use some of what she picked up in China to help the Connecticut Sun make a deep playoff run.

Jones had a breakout sophomore season in the WNBA. The 6’6”forward set the WNBA single-season rebounding record with 11.9 rebounds per game, 403 total rebounds and 280 defensive rebounds. She surpassed the previous league mark of 398 set by Tina Charles in her rookie season with Connecticut in 2010.

“China was a great experience. It was just another chance for me to develop my game and another opportunity to put The Bahamas on the map,” she said.

“Me and my teammates were able to accomplish a lot of great things. That team had not made it to the championships for a very long time, so, we were really happy to be able to make it back there. We showed we were a competitive team.

“In terms of the WNBA, I’m really comfortable in my position and comfortable with my teammates in Connecticut. Also, we were really excited with the way that we ended the season. We have grown a lot as a team from when I came in to where we are at now. So, this season, we want to shatter expectations and take it to a new level this season.”

Along with setting a new league rebounding record, Jones also played in her first WNBA All-Star Game and was later voted the league’s Most Improved Player. She also tied for the WNBA lead, with 20 double-doubles and became only the 13th player in league history to record a 20-point, 20-rebound game during a victory over the Chicago Sky.

Jones was voted in as an All-Star starter and finished with 24 points in a 130-121 loss to the Western All Stars in the mid-season duel.

Behind Jones’ 15.4 points per game, the Sun earned its first playoff berth since 2012. In a single-elimination playoff game against the Phoenix Mercury on September 4, Jones poured in 19 points, 15 rebounds and two assists in an 88-83 loss.