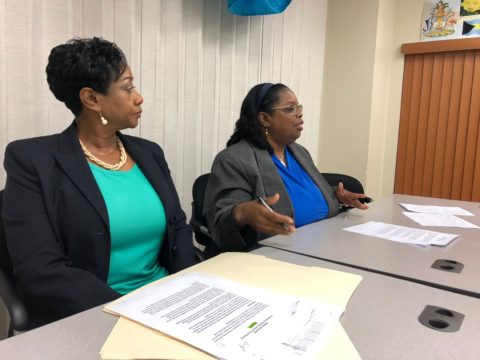 Statistician Cypreanna Winters and Leona Wilson, director of statistics, held a press conference at the Department of Statistics to announce the May 2019 Labour Force Survey results today.

Unemployment drops on NP and GB, but increases in Abaco

NASSAU, BAHAMAS — Joblessness dropped nationally from 10.7 percent last November to 9.5 percent in May according to data released today by the Department of Statistics.

According to the data, employment rose by 4,330 jobs over the six-month period.

At the time of the latest survey, There were 215,000 people employed in The Bahamas.

A closer look at the data shows that two of the three most populated islands surveyed experiences decreases in unemployment rates.

Contrary to the trend, unemployment in Abaco increased from 7.7 percent last November to 9.3% in May – an increase of 1.6 percent.

During a press conference today, statisticians of the department attributed the decline in unemployment to hiring in the private sector, which increased by 1.8 percent, and the number of self-employed people remaining unchanged since the last survey.

According to Department of Statistics Director Leona Wilson, the employment in the private sector the as driven by the hotel and restaurant sector which saw upward movement in employment of 24 percent over the six-month period.

Additionally, the community social and personal service industry, which includes the civil service, police service and domestic service continued to be the country’s largest employer in May, accounting for 35 percent of the workforce.

For more on the latest Labour Force Survey, follow Monday’s publication on ewnews.com