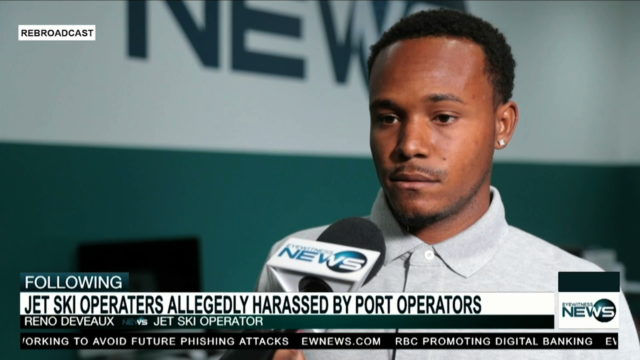 Jet-Ski Operators in the capital are up in arms, having claimed on Thursday that they are being victimized by port officers.

Reno Deveaux, owner of a beach sports company that operates on Paradise Island brought the alleged issue to the attention of Eyewitness News.

Deveaux said he is tired of the alleged abuse of power taken by Port Officers. He even sent the company a video where he was reportedly slapped by an officer while attempting to defend himself.

According to Deveaux, the issue began when one of the other jet ski operators reportedly messed up the ski rental rotation that was set in place to avoid conflict. He explained that he only tried to alert authorities to the issue, but was instead turned into the bad guy. After the assault took place, Deveaux said that he filed a lawsuit against the port officers and the victimization only grew from there.

Deveaux said he had a hearing this week and his license was taken away until December 2019.

Eyewitness News then visited another Jet-Ski operation on Goodman’s Bay where there was a reported conflict taking place.

An operator who spoke on the condition of anonymity alleged that they were threatened and senior port officials reportedly had to get involved.

The anonymous operator said that the port officer threatened to slap her in the face and also verbally abused her.

The officer, however, upon seeing the operator speaking with media, came over to tell her side of the story.

Port officer at Goodman’s Bay, Daisy Russell, said that things are not as simple as the operator tries to make them. She said that jet-ski operators take advantage of her being a woman and abuse her authority. She added that operators attempt to allow anyone with or without licenses to operate on the waters which then is likely to lead the port to fight lawsuits if anything goes wrong.

Russell said that at the end of the day right is right and wrong is wrong, and she intends to protect the port at all costs.