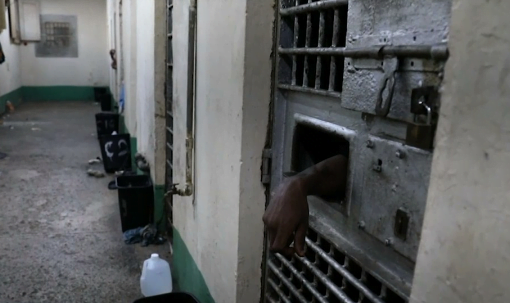 NASSAU, BAHAMAS — “It’s gonna wipe us out,” said a fearful inmate at the overcrowded Bahamas Department of Correctional Services where some 1,600 prisoners shoulder even tighter restrictions during the nationwide COVID-19 lockdowns.

The Fox Hill Road facility has been on lockdown since the country recorded its first case in mid-March with all visitations, commissary and public activities suspended indefinitely.

Commissioner Charles Murphy said last week he was satisfied the prison can appropriately handle an exposure of COVID-19.

However, inmates and their families canvassed by Eyewitness News expressed concerns over the adverse impact of preventative measures and the high risks posed by substandard living conditions.

Father Dervin Edwards, 42, said his anxiety has skyrocketed over the past month because he has not been able to speak to his daughter, who is incarcerated.

Ahead of the lockdown, he said he was told by officials the prison would be closed for at least 31 days.

Edwards said his daughter will be 23 in another week, and while convicted, has had her sentencing delayed by the pandemic.

The prison has a phone system, but Eyewitness News was told the off-site machine to upload credit was not working.

“My concern first of all is about her state, if she is ok, medically physically everything in one,” Edwards said.

“It’s hard. Every night I be up until 2, 3, 4 in the morning thinking about her. The place is on lockdown, you can’t hear from them, can’t see them, don’t know if they’re ok. This is very hard for me as a parent.

“Those people live in dorms and cells and it’s hard to self distance those people from each other. My concern is the place is claustrophobic, you hardly have any air that comes through the place. I’m concerned about her getting the coronavirus or spreading it to others. My concern about that is very very high.

“I don’t know the money she may have had left may be gone, you know for personal hygiene stuff. I don’t know how much funds she have right now. I can’t speak with her to find out. All of that taking a toll on me.”

Edwards added: “The Department of Corrections is a place you got to keep your eyes on your family members or you won’t know what’s going on with them.”

Communication isn’t a an issue for some, according to Tanya Thompson, whose sister is on remand and calls her daily using the prison’s phone system.

Thompson, 32, spoke to Eyewitness News on the condition of anonymity and her name has been changed.

She explained she uses an app to put more credit on the prison phone system, but noted it was a feature which needed to be set up before the lockdown.

“The only machine outside the prison to add money was Balfour Consumer Choice, but that machine is down,” Thompson said.

Thompson said her sister’s main concern was the low stock at the prison’s commissary, and the indefinite suspension of her case.

She claimed remanded inmates do not receive the same level of care as sentenced inmates.

“For some, they have monies on the account, but there is not a variety of stuff to order,” she said. “Because they are remanded, the persons who the jail really cares for in terms of feeding, it’s the sentenced inmates first, then the remanded inmates will get what is left. The remanded people have free world food, that’s what they call it.”

Thompson said her sister claims hygiene in the female wards are satisfactory with inmates given cleaning supplies, like bleach, to keep their areas sanitized.

“They keep their area as clean as they could, it isn’t as bad as the male side,” she said.

“And the female side has beds, and they have their radio by there and there is a TV. When I talk to her she can tell me what she heard on the news about the lockdown.”

Thompson said: “I know that we having this COVID-19 lockdown, but the concern for the majority of them is being that they court case is already postponed for a certain date, and them not being able to go out to deal with their adjourned case or bail hearing is a big issue.

“What they notice is, persons still coming to jail, but no one out jail going out.”

Eyewitness News spoke with several inmates and their families over the past week.

“When they giving you the jail food, they stretch the grits out with plenty water. They don’t care about us. We forced to eat it and it doesn’t have no nutritional value.

The inmate described the situation in the prison’s maximum security area as volatile, noting inmates were becoming increasingly frustrated by strained conditions.

“It soon come to blows, fellas them hungry and they don’t have no food. If one hotdog come, they have to cut that one hotdog in half.”

“The water what they giving us to drink smells like [expletive],” wrote another inmate, after Eyewitness News reached out to his family.

“The place mess up, they’re not letting your peoples put money on the gate. You can’t order water, nothing. They feeding people garbage and sometimes not at all.

The inmate continued: “We does have to boil water in our cell home made fire, that is get ‘ya’ sick as well because of all the smoke in such a small place.”

During last week’s interview, Murphy was asked whether the lockdown had challenged inmates receiving funds for commissary.

When asked if there was consideration being given to inmates without funds or those who run out of money as emergency measures persist, the prison commissioner said: “Not in the immediate future.”

Murphy continued: “Not having commissary does not mean you do not have food, water, and the necessary items that you need for your person. The commissary is a behavior tool. It’s a privilege.”

However for some inmates, like Andrew Davis, the commissary is considered a lifeline.

Davis has written Murphy several times to make an appeal for his special diet due to prevailing health issues; however, his family says it’s unclear whether his letters have been delivered.

In a letter dated April 1, and obtained by Eyewitness News, Davis outlines concerns over his special diet and permission slips that have previously allowed him to receive produce, cooked food, juices and water on the gate due to “failing health issues”.

According to the letter, Davis’ medical issues include: poor circulation of blood in both legs; high blood pressure; heart failure; and high cholesterol.

His letter read: “Due to the quality of food and the way it’s prepared I’m unable to receive a balanced and nutritional meal. I do hope that you can and will see the need and urgency in this matter, because there’s no telling when this lockdown will be lifted.”

Still, Thompson said longstanding and systemic issues continue to impact inmates’ quality of life notwithstanding the virus’ spread outside the prison’s walls.

She pointed to the levy of value-added tax (VAT) on commissary items.

“My concern is, if they are already incarcerated why add VAT onto the products that they have to purchase?” she said.

“Some family members are not…they (inmates) don’t have that support system so if you put $20 on their commissary they can only get a juice and two chips because the VAT money still have to get take out of it.”

Thompson added: “But everything still on standstill. They know now that they can’t go out based on this virus that’s going on. So they’re just waiting, just like everybody else.”