CEO pledges another 30,000 medical masks to shore up govt. supplies

NASSAU, BAHAMAS — As the government seeks to shore up and expand its testing capacity for COVID-19, Island Luck donated 5,000 rapid test kits to the government today.

The minister indicated that the donated rapid tests will undergo a validation process.

He said the masks were expected to arrive in New Providence next week.

“Across the world, we are seeing that the countries managing this global pandemic; the best have made frequent and broad testing of their populations an integral part of their strategy,” Bastian said.

“We are all in this fight together.

“Those of us in the private sector must do our part to help get our country through this crisis.” 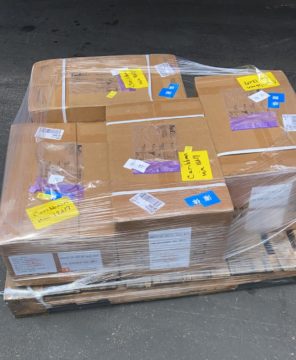 There have been 54 cases of COVID-19 in The Bahamas — 45 in New Providence, seven in Grand Bahama, one in Bimini and one in Cat Cay.

Nine people have died — all over the age of 57.

Heath officials projected there could be as many as 90 cases by Easter weekend; however, on Thursday, officials asserted the mandatory nationwide lockdown has slowed the acceleration of new infections by at least 26 cases.

The Ministry of Health plans to continue to increase testing in the days to come, but has been limited to molecular testing via the RT-PCR tests.

It plans to conduct broader community-based testing as capacity increases.

During a press conference yesterday, Sands said vulnerable groups such as prison inmates, the elderly in nursing homes and healthcare workers will be tested as part of the first phase of the expanding testing this weekend.

As it relates to the rapid test kits, the minister said the validation process is ongoing, but there must be concordance with the PCR tests before more widespread community testing can begin.

Acknowledging healthcare workers who remain on the frontline of the COVID-19 fight, Bastian said: “For those of us who have the resources, we can do more than just thank them for their tireless work.

“Supporting them, ensuring that they have the equipment they need to protect themselves and remain healthy as we navigate this challenging time, is vital for all us.”

Globally, over 2.2 million people have been infected and just shy of 150,000 people have died.

In some jurisdictions, including several states in the United States, there a personal protective equipment (PPE) shortages.

Some of the shortages have been the result of distribution challenges, according to international reports.

In The Bahamas, health officials have said there is an adequate supply of PPEs to protect those on the frontline, and efforts have been made to shore up supplies in the event of a prolonged surge of cases.

Former Chief Medical Officer Dr Merceline Dahl-Regis suggested Thursday that as a result of the sacrifices of the public, progress was being made.

He said: “The Bahamas is heading in the right direction and we should all want that trend to continue.

“I encourage all Bahamians to follow the emergency orders and the advice of public health officials.

“We all have a part to play in protecting ourselves and our country.”

What about licencing of vehicle and Auto store been open at some point .