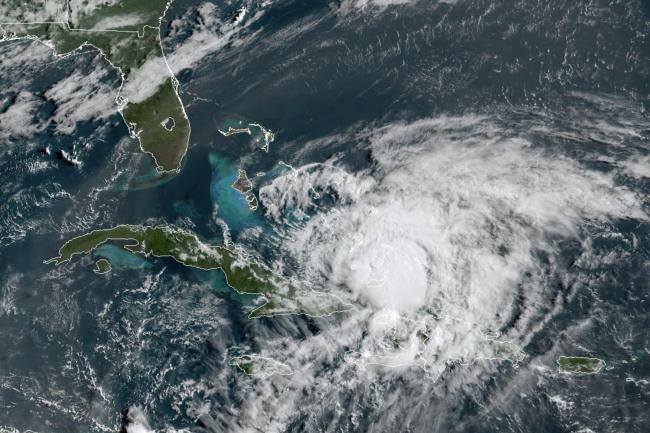 NASSAU, BAHAMAS — After some strengthening overnight, the center of Hurricane Isaias is approaching North Andros with 85 mph winds.

On its current forecast track, the storm is projected to move on land in Andros in the vicinity of Fresh Creek at 10am, and exit the island just south of Red Bay at 2pm today.

“Residents in North Andros along the path will experience a brief calm and are advised not to venture outdoors during the period,” the Department of Meteorology said.

It continued: “Residents in Andros, the Berry Islands and New Providence will experience strong tropical storm to hurricane force conditions this morning, subsiding this afternoon.

“Residents in West Grand Bahama will begin to experience strong tropical force winds this afternoon that will continue through tonight.

“Localized flooding is expected as Isaias is forecast to produce rainfall amounts of four to eight inches.

The Department of Meteorology urged to remain indoors while experiencing hurricane and tropical storm-force winds as tornadic activity was possible in severe thunderstorms.”

A hurricane warning remains in effect for the northwest and central Bahamas.

South Andros administrator Julita Smith-Ingraham told Eyewitness News the storm came over the island around 1am.

“We’re still under the gun,” she said. “Still heavy rains and strong wind.”

When contacted, Cat Island administrator Neil Campbell said there were seven people who sought shelter: one in McClean’s, three in Port Howe and another three in Arthur’s Town.

“We have debris on the roadway in certain parts, especially in the Knowles area.

“We also have minor flooding in certain areas, especially in the Knowles area (south central area). We have a decrease in the sea surge, and electricity has been in and out.

“We had to deactivate the shelter, New Bight Mount Sinai, [so we’re] now operating with nine shelters instead of 10. We had another shelter in area, Holy Redeemer Church; it’s a stronger church.”

Long Island administrator Desiree Ferguson said: “The winds here are calm, the rain has stopped, and it’s clearing up.”

A hurricane warning was discontinued last night for the southeast Bahamas and Turks and Caicos Islands.

Isaias was moving northwest at 12 mph and was expected to decrease in forward speed over the next day or so.

Maximum sustained winds were near 85 mph with higher gusts.

It is expected to maintain its current strength through Sunday.

Storm surges of three to five feet are expected.

The National Hurricane Center projects the storm could have maximum sustained winds of 90 mph over the next 36 hours.

A second system in the Atlantic around 650 miles east of the Lesser Antilles has a 50 percent chance of forming into a cyclone over the next five days.

Meanwhile, a third system in the Atlantic was located 200 miles northeast of the Cabo Verde Islands. The ‘Tropical Depression Ten’, was traveling at 16 mph with maximum sustained winds of 35 mph.

On the forecast track, the center of the depression is expected to pass north of the Cabo Verde Islands later today.