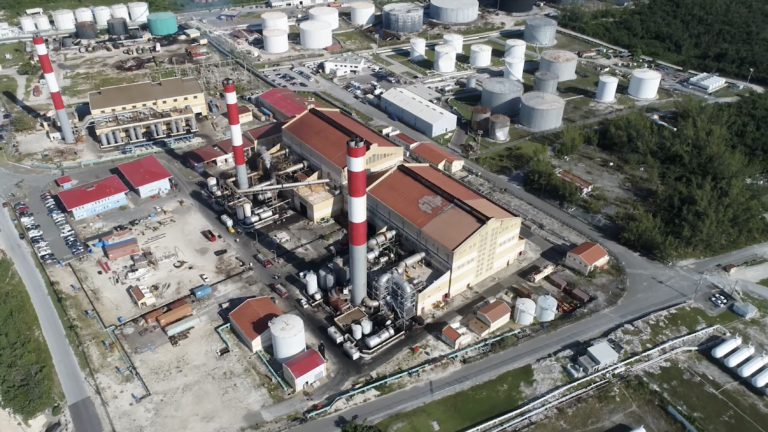 BPL Clifton Pier plant (file photo)
NASSAU, BAHAMAS – Works Minister Desmond Bannister and Shell North America yesterday confirmed an initial public offering (IPO) for shares in the company’s liquified natural gas (LNG) facility, could be on the horizon.
Bahamas Power and Light (BPL) signed a Memorandum of Understanding (MoU) with Shell NA for an integrated LNG gas-to-power project just over a year ago.
A Shell spokesperson told Eyewitness News: “The plans are that Shell and BPL would form a joint venture for the ‘Power Company’ part of the project.
“The ‘Terminal Company’ would also be formed as a joint venture with Shell as the largest shareholder and certain minority interest shareholders from the Bahamas.”
The spokespersons continued: “We are in commercial discussions and will share further details when we are able.
“In the future, there may be the opportunity for the ‘Terminal Company’ to issue shares in an IPO to Bahamians, subject to market conditions and further discussions amongst shareholders.”
Works Minister Desmond Bannister confirmed these developments in an interview with Eyewitness News Online,
“I am aware. What they are doing is in accordance with our manifesto committment,” he said.
“That commitment he noted called for privatizing the utility to ensure Bahamian ownership through majority shareholding as well as providing incentives and tax concessions for the production and supply of alternate fuel sources.”
Shell NA is among the largest global energy marketers and traders, providing a comprehensive portfolio of energy-related products and services an is a pioneer in LNG.
The LNG plant is expected to produce up to 270 megawatts of power.