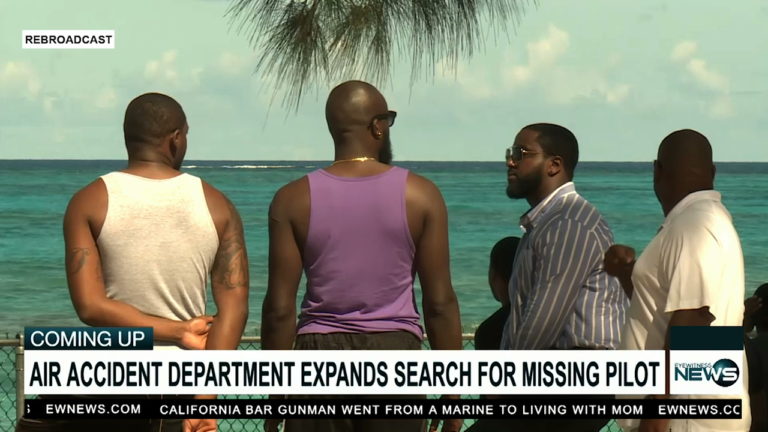 As authorities continue to search for the pilot and aircraft that plunged into the sea a quarter of a mile off Nirvana Beach last Thursday night, Kendal Dorsett Jr, the operations investigator for the Air Accident Investigation Department said investigators will begin to examine other factors to determine what led to the crash.

“The occupant and the aircraft are obviously vital for our investigation, but in absence of that we just have to look at other factors, including the weather, [and] the maintenance records of the aircraft,” Dorsett said.

“And so, that’s our course of action, at least into the foreseeable future.”

The pilot, Byron Ferguson, 34, reported to Air Traffic Control that he was experiencing difficulties shortly before radar contact with the six-seater plane was lost around 9:03 p.m., according to authorities.

Search and rescue efforts on Thursday night led to the discovery of the aircraft, but the pilot remained missing.

Those efforts were temporarily suspended around midnight until early Friday morning.

However, when authorities, including Royal Bahamas Defence Force divers, returned to the coordinates where the aircraft was spotted the night before, it was not in the same position and believed to have shifted.

Assistant Commissioner of Police Leamond Deleveaux confirmed to Eyewitness News that search efforts have been expanded and will continue until authorities can bring conclusion to the matter.

Meanwhile, Dorsett said investigators will pursue other factors that they can rule out.

According to authorities, the Piper Aztec aircraft was en route from West Palm Beach, Florida.

It was registered in the United States.

Asked if investigators were in possession of the maintenance records, Dorsett indicated that those documents had been requested.