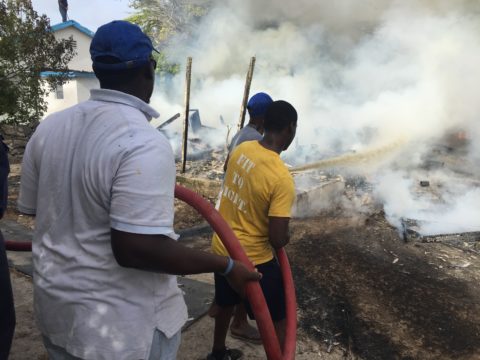 Members of the Royal Bahamas Defence Force help to put out the blaze on Inagua.

Fire investigators in Matthew Town, Inagua are today piecing together the circumstances surrounding a fire that destroyed a single story structure on that island early Tuesday morning.

Police reported yesterday that it was shortly after 8:00 a.m. when officers were patrolling Victoria Street, when they discovered a wooden residential structure engulfed in flames.

Police confirmed that no one was inside the building and a community effort, which included the United States Coast Guard (USCG), led to the extinguishing of the fire which destroyed the building.

Fire services officers from New Providence are expected to take over the investigation.