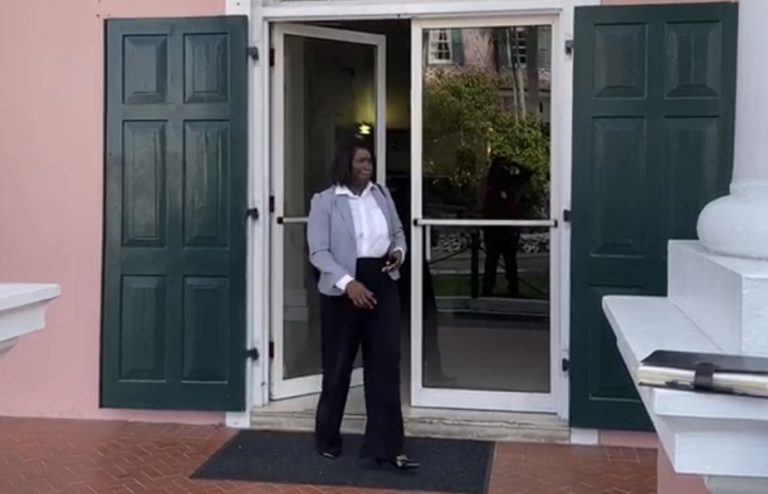 NASSAU, BAHAMAS — The investigator in the bribery trial of former Cabinet minister Shane Gibson yesterday admitted that she realized she was wrong to take statements from the prosecution’s key witness Jonathan Ash and Gibson’s associate Deborah Bastian in each other’s presence to “iron out” differences in their statements.

Gibson, 58, is accused of receiving $280,000 from Ash between January 2017 and March 2017 to induce payments owed to him by the government for cleanup work in the aftermath of Hurricane Matthew in October 2016.

Gibson was in charge of the recovery and restoration effort.

The investigator was questioned at length for the second day by Gibson’s lead defense attorney Keith Knight, QC.

The court previously heard that Thompson called a joint meeting between Ash and his attorney, and Bastian and her attorney in September 2017 to deal with ambiguities and differences in their statements accusing Gibson of bribery.

Referencing Thompson sworn affidavit, Knight said: “At the meeting that I just referenced to in September 2017, you said this: ‘and the reason I invited you back here was to clear up some ambiguities in your statements in terms of your account of the day y’all met him (Gibson) and as it relates to how much money you (Ash) gave Ms. Bastian because those accounts differ’. Correct?”

Bastian acknowledged she made the statement.

Thompson agreed that officers, nor lawyers, should not prompt or tell a witness what to say when they provide a statement.

However, she said it has been her experience depending on the circumstances, that officers give witnesses explanations “as to how to say it”.

Knight asked: “In a criminal case?”

Thompson answered: “Yes, that happens all the time.”

Knight asked: “And there were occurrences during that meeting where Ms. Bowe, Mr. Ash’s lawyer, intervened to assist in telling Mr. Ash how to give the statement. Is that correct?

Thompson replied: “She did, yes.”

Knight asked: “And the same with Mr. Rolle to a lesser extent, but the same?”

Thompson conceded that there were times when Ash’s and Bastian’s lawyers advised their respective clients of portions of their statement which could be removed, and the final document became their signed statements.

She also acknowledged the statement of one witness was altered in the presence of the other to accommodate the ambiguities in their statements being cleared up.

Knight said: “It was taken out of the statement with the assistance of the lawyers.”

She replied: “The lawyers were there to clarify.”

Knight proposed: “Do you recognize that was wrong?”

Thompson answered: “In hindsight, I would now say yes.”

When asked if then Deputy Commissioner of Police Anthony Ferguson knew about the adjoined meeting, Thompson said he did.

She also conceded the director of public prosecutions was also aware of the joint meeting between herself, Ash, Bastian and their lawyers.

Knight suggested the way Thompson handled the investigation could affect the fairness of the trial and to an extent, prevent the defense from poking holes in the witnesses’ statements.

But Thompson shook her head in disagreement.

The attorney said: “Witnesses colluding so the evidence is synchronized. You don’t think that would affect the fairness of the trial?”

Quoting Thompson, Knight said: “’We need to iron this out, what transpired leading up to the meeting, on the day of the meeting and how much money’. Your words?

The defense attorney also told the court Thompson said she needed “all to be synchronized with that, and maybe later today or early tomorrow you can come by and sign off on it. I am going to take some stuff out and just clear up one or two words”.

Knight suggested to the officer the holes in Ash and Bastian’s statements needed to be synchronized, but she disagreed with the suggestion.

“I would not agree,” Thompson said.

“I meant clear it up when I said synchronize.”

Knight continued: “So, it would become as one. Ms. Thompson, you recognize what you did was wrong?”

Thompson answered: “At the time I did it, I did not see it as wrong. I wanted to clear up ambiguities. By synchronize, I meant clear up.”

The defense attorney suggested that what the investigator did was “dangerous”, and violated the principles of the Royal Bahamas Police Force’s training manual, which he produced and showed to Thompson.

However, Thompson said she had not seen the document nor had she seen a police force training manual, though she had received training on how to interview witnesses.

He failed to get Thompson to concede this point.

She said: “I disagree with you and the purpose of the meeting was to clear up ambiguities.”

Knight shot back: “Don’t repeat it too much because it is wrong.”

Knight also suggested to the officer that her actions were “deliberate, and calculated”.

However, she denied this and insisted the “substantial core” of Ash’s and Bastian’s statements never changed.

When the crown prosecutor James Guthrie, QC, reexamined Thompson, the investigator noted that Gibson’s statement to police was recorded, documented, hand written and he signed on the same day. She; however, took notes from Ash and transposed a statement for him to sign two days later.

She said this was done because Ash was not a suspect in the case.

She also said it was uncommon to video record witnesses’ statements.

Thompson added that Gibson was also given the opportunity to review and edit his statement to police.

The trial continues on Tuesday.