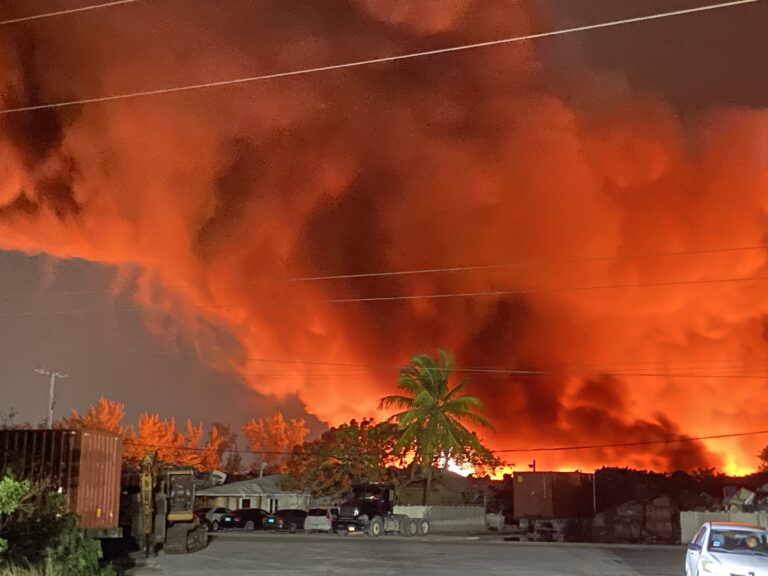 Fire still burning but has been contained

Police initially reported the fire had taken place at NPEP, formerly known as the New Providence landfill, but later issued a correction.

Fire services sprung into action in responding to the blaze, which quickly grew as thick smoke began to billow over the area.

Police Press Liaison Officer ASP Audley Peters said when fire officers arrived on the scene, which is private property, they met the compound engulfed in flames and realized their equipment was unable to reach the fire because it was located at the center of the property.

Heavy equipment had to be mobilized to create barriers to contain the fire on the western and northern sides of the property before the fire department could determine whether to use other assets to extinguish the blaze.

Peters said it was still unclear what caused the fire.

“Where it began, there were old vehicles and it’s a possibility that’s a result of a flame being ignited,” he said.

He noted there were no injuries reported and no damage to the facility’s building, but added that efforts were being made to protect other company assets and authorities were doing everything possible to ensure the fire did not spread into nearby neighborhoods.

“We will do our best to contain it as best as possible,” Peters said, indicating last night that the fire had a sizeable circumference and was spreading.

He said firefighters would likely be working throughout the night.

“Based on the setup at the moment and what has to be done, it’s going to take us a while. The equipment is on the ground and moving,” he said.

Peters added that should the fire get out of control, authorities are prepared to bring in all of the assets available from police and the airport.

Up to press time, the fire has been contained and efforts to extinguish it continue.