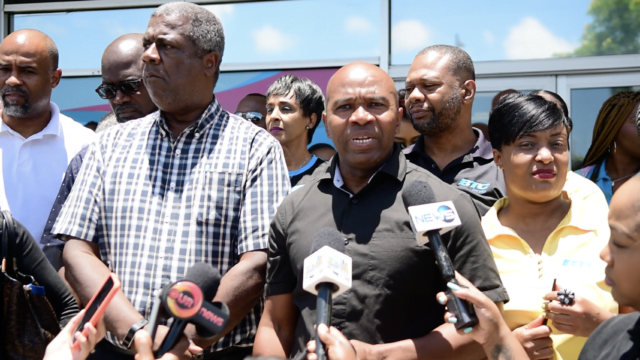 Union: “We will continue to agitate until Mr. Sinclair is gone”

NASSAU, BAHAMAS – Bahamas Communications and Public Officers Union (BCPOU) President Dino Rolle said yesterday that the union will continue to agitate until Liberty Latin America CEO Balan Nair and BTC Chief Executive Officer Garry Sinclair resign, saying if the pair do not step down, the union will “do what it must”.

“We are not comfortable with the likes of Balan and Sinclair trying these plantation tactics of trying to put one group of persons against the other, and that is why we are calling for his resignation because that is a clear indication of poor leadership, and he can carry Mr. Sinclair with him because he seems to be running rudderless, and has the company running rudderless. We will continue to agitate until Mr. Sinclair is gone.

During a recent Liberty Global meeting in Jamaica, Nair said BTC is one of Liberty’s lowest performing subsidiaries.

He also said that during a recent meeting with Minnis, the prime minister lobbied for more Bahamians to be employed, but jeered that the prime minister was “not trying to make eye contact” with Sinclair, a Jamaican national, who was sat across from him.

BTC is a subsidiary of Liberty Latin America.

Nair’s comments, which have been widely circulated on social media, were captured on video.
Asked about withdrawal of enthusiasm, Rolle said while the union has no intention of interrupting services to the Bahamian public, notwithstanding the host of internal issues the union is faced with, “we will continue to do what we have to do”.

He also charged that the CEO has yet to present a clear plan to grow BTC.

“For the first time since BTC was acquired by Cable and Wireless — we have gone through a number of CEOs, but for the first time we are asking for the removal of a CEO because we have no confidence in him,” the union president said.

“I say again, if Mr. Balan Nair, who is the CEO and president of Liberty Latin America could go a try to put us against our brothers and sisters in Jamaica, implying that their efficiency versus ours is like night and day; it is because we have a CEO like Mr. Sinclair; maybe it is because of the lack of leadership under Mr. Sinclair…”

Rolle said union executives were expected to meet with Sinclair last Friday to discuss the voluntary separation packages for an expected 100 employees, but those discussions did not proceed.

“In a communication to both unions, Mr. Sinclair said he has concluded talks with us, so in essence what he did is he cut off the talks unilaterally and told us that he would be rolling the VSEP out, and that is really in contravention to the agreement that we have with him,” Rolle said.

“We had via email and two cycles of back and forth with numbers.

“We had a meeting set for 10:30 a.m. Friday and prior to us going to that meeting we received the communication from the CEO indicating that he unilaterally cut off the talks as per the VSEP and he believes that the company has offered all that it can.”

Rolle said the move was “disingenuous”.

According to the union, there are approximately 481 full-time employees at BTC.

In a statement over a week ago, Sinclair said the company was not planning any involuntary separation exercise for BTC employees.

Rolle added that moral is at an all-time low.