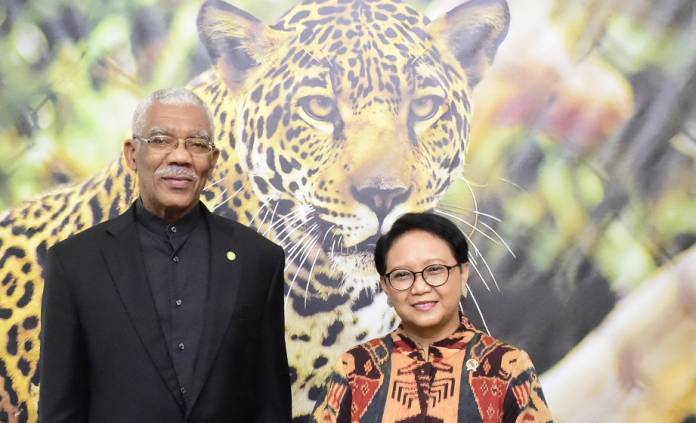 GEORGETOWN, Guyana – The Indonesian foreign minister, Retno Marsudi, after her presentation at the United Nations in which she called for the “the enforcement of international law” at the UN Security Council (UNSC), and in particular as it relates to Palestine, arrived in Guyana on Friday and held talks with President David Granger and Foreign Minister Carl Greenidge.

The minister was accompanied by Indonesia’s ambassador to Guyana and Suriname, Dominicus Supratikto, who is based in Paramaribo.

The visit of Marsudi, the foreign minister of the world’s largest Islamic country, marked the highest level visit from an ASEAN foreign minister to Guyana in recent times and is viewed as very significant.

Interestingly, Suriname, home to a large Indonesian diaspora, was not included in her itinerary. She has been due to visit Suriname for some time.

In the meantime, the much talked about Suriname/Indonesia Joint Commission has yet to meet and the visit of the Indonesian foreign minister to Suriname has yet to materialize. In addition, Suriname hasn’t named an ambassador to Jakarta, to the dismay of many, considering the fraternal bond between the two countries.

But in Guyana, the foreign minister held talks with Granger on Friday. Granger assured Marsudi that Guyana remains open to Indonesian investment, especially in value-added manufacturing, agro-processing and within the sugar industry.

Granger highlighted the long-standing good relations between Guyana and Indonesia and said that this forms the basis for strengthening ties between the two countries, which share a common history of colonisation.

In her meeting with Granger, Marsudi said that, although trade between the two countries has increased in the last three years, it is still small and reflects an area of bilateral ties that can be improved.

In relation to energy, Marsudi said that the oil and gas experience of Indonesia can support Guyana’s fledgling oil and gas sector.

Guyana-Indonesia ties improved after Guyana joined the Islamic bloc, the Organisation of Islamic Cooperation (OIC) in 1996, and in 1999 diplomatic relations were established between the two countries.

However, the two countries have strong and historical ties dating back to the founding of the Non-Aligned Movement in the 1970s. Through the Islamic Bank’s reverse linkage South/South cooperation, Indonesia is supporting the agriculture and livestock industries of Guyana.

Granger is expected to make official visits to Indonesia and some Arab countries in the Gulf.