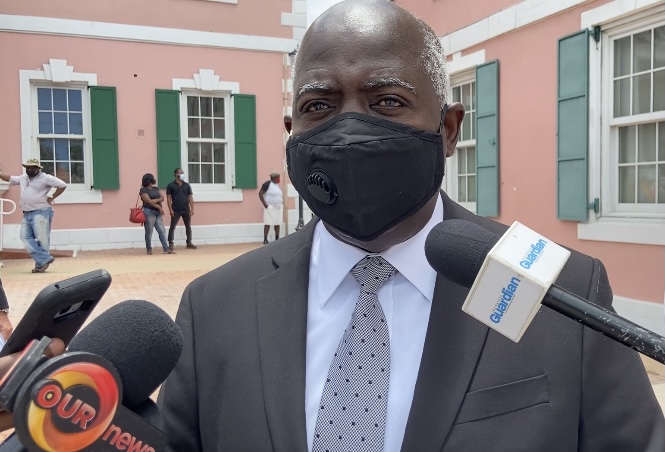 NASSAU, BAHAMAS —  Opposition Leader Philip Brave Davis yesterday warned that the “administrative impasse” between the House of Assembly speaker and the government could lead to an interruption in the legislative agenda.

Davis was responding to declarations made by House Speaker Halson Moultrie prior to the sudden suspension in House proceedings after a showdown with the prime minister.

Speaking to reporters outside Parliament, Davis said he was surprised by the move but understood the speaker’s position.

“Clearly the prime minister has been taking the speaker for granted, in the sense that from what he had to say, he obviously was disrespected,” he noted.

“…He is concerned about the COVID rules and obviously what he is reminding the prime minister is this pandemic is serious and he is not taking it serious.”

He continued: “This is going to produce what I call an administrative impasse between the speaker and the government, which will impact no doubt the legislative agenda and any other matters relating to House proceedings and they need to resolve that.”

Parliamentary proceedings were suspended briefly yesterday after Moultrie called on Prime Minister Dr Hubert Minnis to answer the concerns he had raised, including the handling of the COVID-19 exposure in the Bay Street building.

The prime minister took to his feet and attempted to lead the House to the debate of the day, but Moultrie shut him down and demanded that he “speak to the Bahamian people”.

Asked whether he believes the prime minister should have answered the speaker’s questions, Davis said: “The speaker is in charge of the House of Assembly and we are all subjected to his authority. He can ask the prime minister to give an explanation for things; that’s within his province.

He noted, however, that the discussion should have been had privately before it was made public.

During the break of the morning sitting, Davis, along with Englerston MP Glenys Hanna-Martin, crossed the House floor and had a brief conversation with the prime minister.

Davis told members of the media outside of Parliament that he did not wish to share the details of that conversation.

“It’s rather a personal conversation, and it’s about what I think they ought to do to resolve this impasse. I think what it requires is just them continually updating the speaker,” he said.

The opposition has moved two votes of no confidence against Moultrie over the duration of the Minnis administration.

Davis noted yesterday that they have had concerns about the speaker’s behavior and believe his actions are a “manifestation” of the challenges they forewarned.

“But we are not going to the issue between the speaker and the government at this time.

“This government has expressed their confidence in him and as such, they need to ride it until it comes to its conclusion, whatever that conclusion may be.”