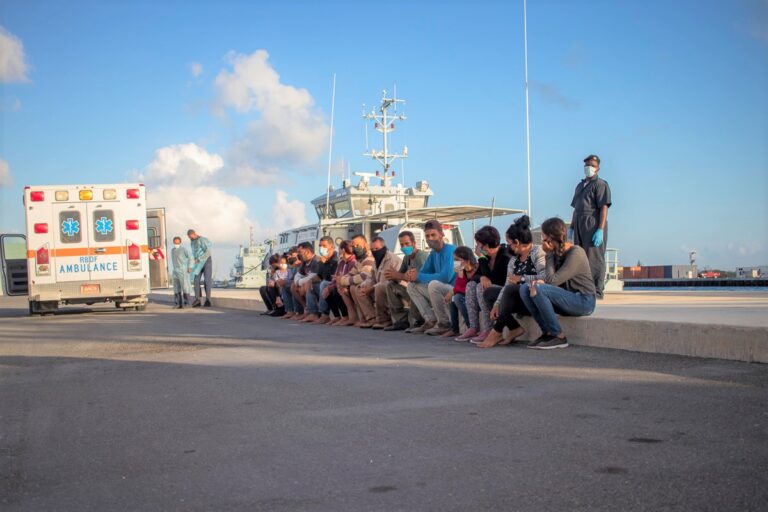 Cuban nationals arrive at the Royal Bahamas Defence Force (RBDF) Coral Harbour base on Thursday, June 24, 2021 after being apprehended on Anguilla Cay on Tuesday, June 22, by the US Coast Guard. (RBDF PHOTO: PETTY OFFICER AL RAHMING)

Cartwright insisted his stance was not rooted in xenophobia or hatred but in protecting the country’s sovereignty amid a “growing chorus of fear” that Bahamians are being disadvantaged in housing and economic opportunities.

The St Barnabas MP acknowledged the country had grappled with irregular migration for decades but noted concerns have deepened in the past eight months.

“We have an illegal immigration crisis and the government has a duty to act for country and for the Bahamian people,” he said.

“The Bahamian people have been very concerned about the state of affairs regarding illegal immigration and specifically the build-up of shantytowns across the country. This is not about xenophobia or hatred. Our nation has been built by the inclusion of the legal movement of people, particularly those from our sister Caribbean nations.

He continued: “It is about protecting the sovereignty of the Commonwealth of The Bahamas and protecting the national interest of the Bahamian people. As stated in a prior statement, we are hearing a growing chorus of fear about Bahamians being left to fend for themselves as far as economic opportunities and housing in their own country.”

Cartwright said while there are no immediate solutions, there must be an acknowledgment that a crisis exists.

“For many people there is a basic sense of unfair competition in The Bahamas for those who play by the rules,” he said.

“The government must get more serious about enforcing our immigration laws and those laws are being broken to facilitate the illegal occupation of land. As government MPs lament the inaction of the government on the immigration crisis, Bahamians remain frustrated and disadvantaged.

“We emphasize again that we are all aware that the shantytown issue on Abaco is before the courts, but there are apparently many other laws being violated that do not pertain to the buildings in those communities. We call upon Bahamians complicit in employing and housing illegal migrants to cease. Government must get serious about enforcing our labor laws.”