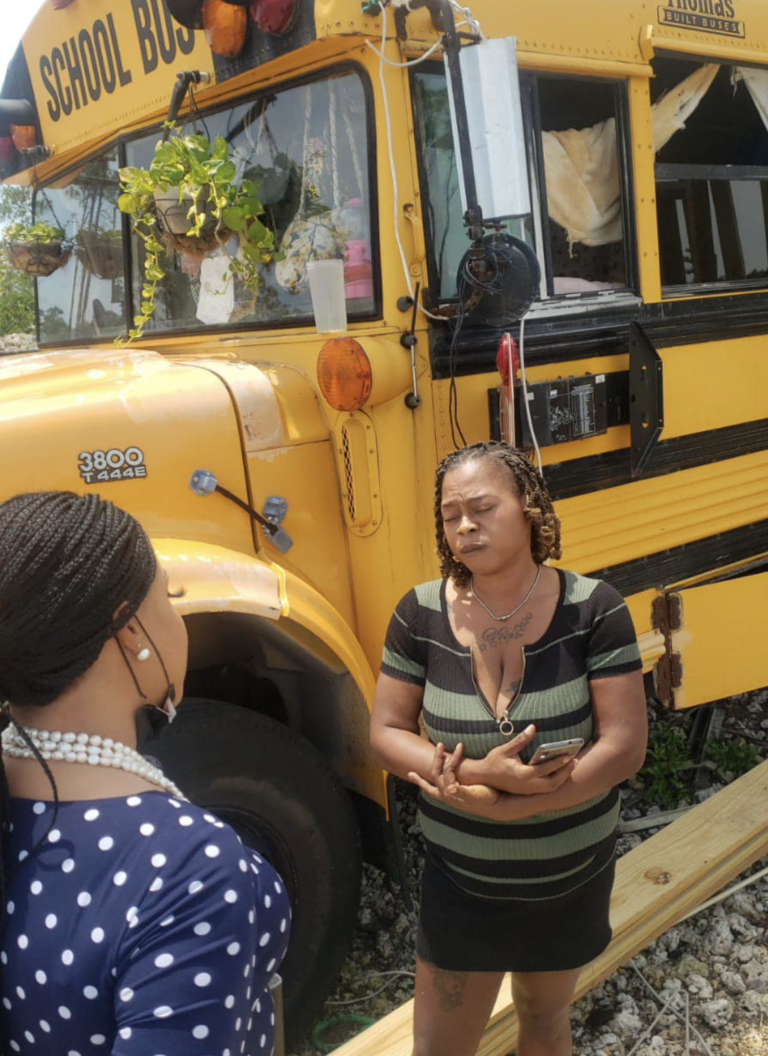 Another resident occupying the land says the government’s narrative is false; residents have gone through steps to obtain Crown Land

NASSAU, BAHAMAS — Danielle Williams, a mother who has been living on a derelict school bus on disputed land in southern New Providence refuted yesterday that she is squatting, insisting that her application for Crown Land received a response, though she did not advise if it was favorable.

Eyewitness News reported yesterday that Minister of Social Services and Urban Development Obie Wilchcombe, and other ministry officials, offered the young mother and other residents temporary housing and other forms of assistance, but the residents expressed a desire to await the outcome of their Crown Land application.

Residents occupying the land were given 14 days to cease and desist by other government agencies, but Wilchcombe said their plight, as well as their expectation, derived from an interpretation of previous pronouncements made by the former Prime Minister Hubert Minnis related to Crown Land, warranted further dialogue on the issue.

“Listen to me, I’ve been good doing everything on my own [and] never asked for any handout from social services nor from no people because of this same reason: people using your struggle for a story or making it seem as if they helping or doing a good deed,” said Williams, who was photographed during her interaction with social services officials.

“I’m not squatting. I’ve applied and did all the proper procedures for the land and got a response.

“People just intend to go with the whatever the media speak and run with it.

“I was never ashamed of where I’m living and how I’m living.

“It just was no one’s business. I’ve made the best out of my situation and go to any extent to make sure my kid is comfortable.

“I push very hard to make sure my struggle is never her struggle, but yet people putting me down for making my situation work or making the best out of my situation?”

Expressing concern about being harshly judged by the public, Williams said she has faced criticisms for making ends meet, but would have faced condemnation had she begged for assistance.

“If I had come here begging, people would of [said] you’re a healthy adult, go find work.

“I never went to social services for any help whatsoever.

‘These people came to me talking about no cameras because they wanna’ feel my heart, but still posted pictures.

“I don’t know when the Bahamian people are going [to] see this is not about me living in a bus nor the well-being off me and my child’s situation.

“It’s all political because the government [has] been aware of me being in the back off here.

“I’m Bahamian, just fighting and standing for what is mine.”

The mother cautioned the public against what she deemed untruths surrounding the land she lives on, claiming it will be sold to foreigners to turn into a golf course or some other development.

“I just got caught [up] and used as a charity case ta’ make themselves look good.

Another resident, who said he has been living on the land with his family for a “number of years” labeled the government’s actions as an attack on Bahamians — a similar claim to that made by Coalition of Independents Leader Lincoln Bain.

He pointed to his one-storey home; elevated several feet off the ground and outfitted with a porch, numerous windows and a gable roof.

“Our elected representatives have chosen to fight us on the issue of Crown Land,” he said, bemoaning the minister of national security and law enforcement agencies who visited the area last week and advised residents to leave.

He said Crown Land is “the people’s land” and elected officials are “only there to be the actual stewards and holders of the land”.

“Every Bahamian national has a right at any time to possess and go through the necessary process to obtain Crown Land,” the resident said.

He added: “That is what my family has done and many families in the back has done.”

I completely agree, many of the lands that the Haitians are living on government crown land but they will never disturb the Haitian because many have had children which can vote, and Haitian stick together unlike Bahamians if you mess with one you mess with all. and this doesn’t just go for the PLP, it goes for the FNM also nothing has changed with either party yet they say Bahamians first but are quick to kick Bahamians off their own God-given land and rights but allow thousand of foreigners to occupy crown land belonging to Bahamian