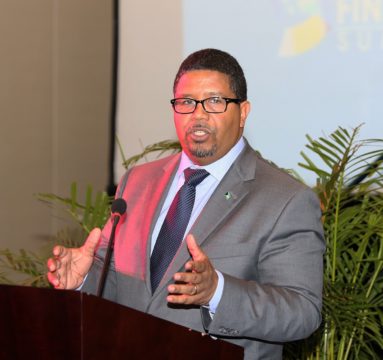 Acting Prime Minister and Minister of Finance Peter Turnquest said the illusion that individuals had of The Bahamas being a tax-free place will no longer be sustainable.

“I can speak to just one reason why, which is the deliberate restructuring of the country’s tax system,” the Acting Prime Minister said at the Institute of Chartered Accountants of the Caribbean’s 36th Caribbean Conference of Accountants held at Atlantis, Friday, June 22, 2018.

“As a government, we are moving away from narrow-based and distortionary taxes so we can achieve the following objectives:

The acting prime minister said when it comes to restructuring the tax system, the bottom line for accountants is that as the country gets into a more complex tax environment, which is already underway, the demand for their expertise is going to be even greater.

He said businesses and individuals will need their knowledge, as will the government.  Opportunities will abound in traditional areas and niche segments.

Turnquest said in the public sector alone, the government is already recruiting Bahamian professionals to work as VAT auditors.

“The government has outsourced VAT auditing to an international team ever since VAT was introduced. We fly them in quarterly at great expense to stay for several months at a time to conduct spot checks on VAT registrants, of which we have over 6,000.

“For the first time, we have implemented a strategic plan for the government to transfer those responsibilities to Bahamian professionals.”

He said over the next few years, the government will transition to a full team of Bahamian VAT auditors, creating new career paths for Bahamian professionals.

Turnquest said between the demand for VAT auditing and VAT accounting the government is creating new subsectors of opportunity for Bahamians. “And as we continue our tax reform plans, tax accounting and tax auditing on the whole will expand.”

He said the Ministry of Finance is currently recruiting 30 accountants: 15 of them will support the needs of the Central Government as it transitions to accrual accounting and undergoes public financial management reform; 15 of them will be trained specifically to join the VAT audit team.

“The government has already bolstered the Treasury Department by recruiting 10 junior accountants. And a few senior professionals will also be brought on to assist with the broader restructuring that is underway,” he said.