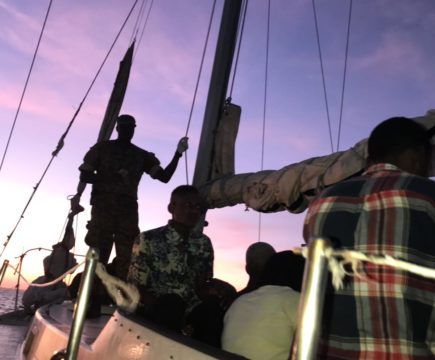 NASSAU, BAHAMAS –  Rather than being held for deportation, Haitians who enter The Bahamas illegally will be immediately charged before the court and repatriated. The move means that Haitians will now have a criminal record and cannot get a work permit if they later decide to make an application to work in The Bahamas, said Immigration Minister Brent Symonette on Tuesday.

“Regrettably for some of the persons…we are now taking them to court when they are found. Whereas before, we use to deport them. This now means that all of those Haitian persons and others who got deported, they will now have a criminal record,” Symonette revealed.

“Under my watch, and to the best to my ability, no one will get a work permit that has a criminal record so those persons have been sort of placed in a bad position.”

Symonette’s comments came Tuesday as he spoke to reporters on the steps of Cabinet before their weekly meeting.

Since the opening of the new year, boatloads of Haitians have entered The Bahamas illegally.

The latest apprehension was last week Thursday, January 3, when 54 Haitian migrants were apprehended in the Abacos.

This latest apprehension follows the capture of 124 Haitian migrants in waters eight miles south of New Providence on December 30, and 16 Haitian migrants on January 1 after authorities found a wooden sloop off the shore of South Beach.

Yesterday, Symonette said the influx of Haitians coming to The Bahamas in recent weeks is not unusual during this time of the year as migrants usually make an attempt to come to The Bahamas during the Christmas holidays.

“I think you have found that we have apprehended a number of them,” Symonette said.

“Certainly the other day a flight with 100 and some odd Haitians were repatriated.

“They went before the courts, they are found guilty and they are repatriated so we have been very successful on that issue.”

The immigration minister also highlighted that persons who are entering the country illegally are oftentimes being facilitated by a person or persons who are already living in The Bahamas.

Such persons, he said, are in big business.

“Trafficking of people is a big business and there are people who are living monsters who are dealing with it,” Symonette said, adding that the revised Immigration Act addresses this issue.

“I think we have to get there because if a person is abusing the immigration law and they themselves have a permit, that work permit is cancelled immediately.

“You cannot get caught facilitating and still expect to stay in this country working or living, ”Symonette warned.

The immigration minister said if Bahamians are really concerned about illegal migration, such persons should be reported so that they can be prosecuted.