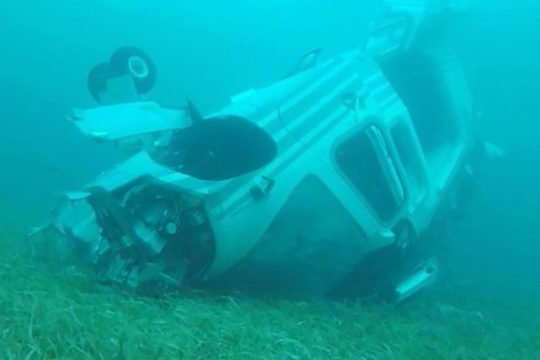 A preliminary report completed by the National Transportation Safety Board (NTSB) into a helicopter that crashed in waters off Big Grand Cay on July 4, killing seven people on board, including billionaire Chris Cline, indicated that sometime after liftoff the helicopter began spinning out of control.

The cause of the crash was not provided. It is expected to be detailed in the NTSB’s final report.

The commercial pilot, airline transport pilot rated copilot, and five passengers, including Cline and his daughter, were all killed.

The report, released last night, was completed by Timothy Monville, the investigator in charge.

According to the report, the Agusta AW139 helicopter was owned and operated by Challenger Management LCC.

The helicopter was transporting two passengers to Fort Lauderdale for medical treatment.

It departed Palm Beach International Airport, West Palm Beach, just before 1 a.m. and landed on the concrete pad at Big Grand Cay between 1:30 a.m. and 1:45 a.m., according to an eyewitness account.

After landing, the helicopter remained on the ground with its engines operating, while the passengers boarded, the report said.

“During the subsequent takeoff to the east, the witness reported that the helicopter climbed to about 30 to 40 feet and accelerated while in a nose-down attitude,” the report read.

“He did not notice anything unusual while he observed the helicopter depart.

“Another witness, who was located about 1.6 nautical miles southwest of the accident site reported seeing the helicopter lift off and climb to between 40 and 50 feet above ground level; then shortly thereafter, he noted blue and white lights spinning to the left at a rate of about one to two seconds between rotations while descending. He estimated that the helicopter rotated to the left three to four times. He then heard a ‘whoosh, whoosh, whoosh’ sound, and lost sight of the helicopter, which was followed by the sound of an impact.”

The witness went out on his boat around 2:05 a.m. and used spotlights to search the area where he thought the helicopter had crashed, but was unable to locate it, according to investigators.

The helicopter was not found until sometime between 4 p.m. and 5 p.m. the next day in around 16 feet of water around 1.2 nautical miles north-northeast of the departure site.

The report indicated that the Federal Aviation Administration issued an alert notice for the overdue flight around 3:21 p.m.

The helicopter was found inverted and the tail boom was separated from the aft fuselage.

It was recovered in multiple pieces, the report noted.

The tail rotor assembly, which was also separated, was also recovered.

As a part of the investigation, an examination was completed of the airframe, engines, flight controls, seats and restraints.

The helicopter was equipped with a multi-purpose flight recorder,  enhanced ground proximity warning system and several additional components capable of storing non-volatile memory — all of which were recovered and retained for evaluation and data download.

The NTSB noted that the investigation was initially under the jurisdiction of the Air Accident Investigation Department (AAID) in The Bahamas, and was turned over to the NTSC on July 8.