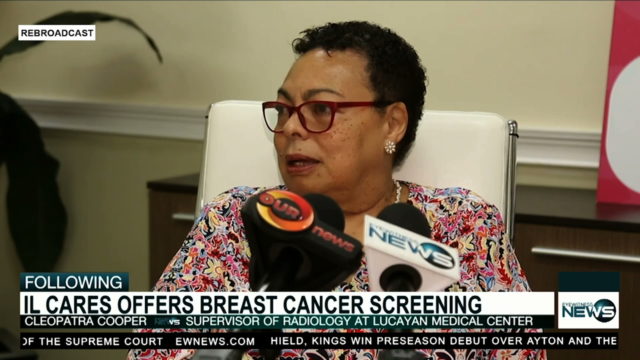 In an effort to encourage early detection of breast cancer, the IL Cares Foundation on Wednesday hosted their third annual ‘Check it to Catch it’ breast cancer screening initiative.

IL Cares Founder Sebas Bastian said during the past two years, the initiative has welcomed over 700 participants and has detected early cancer stages in at least three persons.

The mammogram screening has been available at the Fourth Terrace Diagnostic Center in Nassau for the past two years, but Bastian announced on Wednesday that they have extended the initiative to Grand Bahama.

“I’m also pleased to announce that we have partnered with the Lucayan Medical Center in Freeport to extend this very important opportunity to our patrons residing in the great island of Grand Bahama,” Bastian said.

“Having lost many friends and loved ones to the deadly disease, I know first-hand the importance of early detection.”

Also present at Wednesday’s press conference was chief radiologist in charge of screening at the Fourth Terrace Diagnostic Center, Dr. Elizabeth Darville. She expressed that it is her hope that many would take advantage of this opportunity and get mammograms.

“It is very important at any time of the year,” Darville said.

“But because October is designated as breast cancer awareness month, people like Island Luck and other responsible community organizations take the opportunity in October to extend this sort of thing to their clients or their staff.”

Supervisor of Radiology at the Lucayan Medical Center in Grand Bahama, Cleopatra Cooper, said she is very thankful for the new opportunity.

According to Cooper, the detection rate in Grand Bahama has been very surmountable. She said that in her almost 15 years of living in Grand Bahama, 7 out of every 10 patients were diagnosed as a result of early screening.

Cooper said that she is elated about the opportunity and is encouraging Grand Bahamian women to come out and have a mammogram.

Bastian also added that there is a possibility that they may venture into the Family Islands to spread the initiative. He said that over the next year he and his team will be looking to see which islands have the necessary facilities and equipment to perform breast cancer screening.

“We’ll be happy to add those islands to our program,” Bastian said.