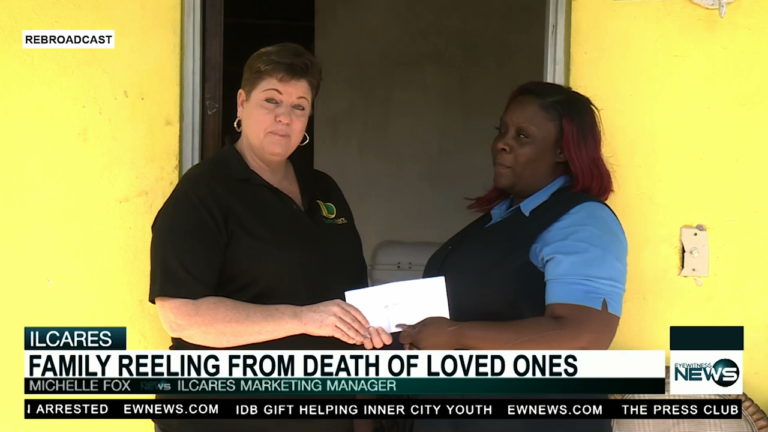 Admitting that she was on the brink of a nervous breakdown, depressed and wanted to give up, a monetary donation from the Island Cares Foundation to assist Nureka Davis and her family could not have come at a better time.

Over the past five years, the mother of four had to endure and overcome a number of battles.

“I had to be strong for them,” Davis recalled. “I had to tell them that their mother was gone and it was the worst day of my life.”

What’s more, on that fatal evening, Davis’ husband was also shot and her brother-in-law was killed.

“No one can begin to imagine what that felt like unless they lived it,” she said.

Davis said her mother helped to take care of the children that he sister left behind but she was battling her own sickness.

“There wasn’t anything my mom would not do for her children or her grandchildren,” Davis said as she fought back tears. “Shenique was her baby and the loss literally broke her heart. She did all she could to help with the children, but she had diabetes and an enlarged heart.”

Davis suffered another loss when her mother, Marilyn Ferguson died in March of this year and her situation to cope financially went from bad to worse.

“We faced financial challenges and it was very rough because we almost lost our home,” she said.  “I no longer had my kids to take care of my sister’s kids. [There are] Seven children and my husband and I. It has not been easy.”

If that was not enough, fire broke out in Davis’ home in late summer and the family lost everything.

“I reached my breaking point, I felt depressed and alone and I was strong for everyone for so long but had no one to be strong for me. Many times I just wanted to give up.”

Davis and her family received a donation from the Island Luck Cares foundation yesterday to help them get back on their feet.

Marketing Manager Michelle Fox said the thrust of the Foundation is to assist those in need.

“It is such a tragedy what happened five years ago but the family continues to suffer,” Fox said. “It is stories like this that linger. We just want to assist in helping them get comfortable and get back into their home, and that is what the Foundation is all about.”

Davis said the donation will give them a jumpstart on repairs, and while she may have been at the lowest point in her life, she told Eyewitness News that the children were always a priority.

“You may think that you’re going through a lot but there is always someone out there with more problems and they have their head held high, so you have to remain encouraged and keep God first.”