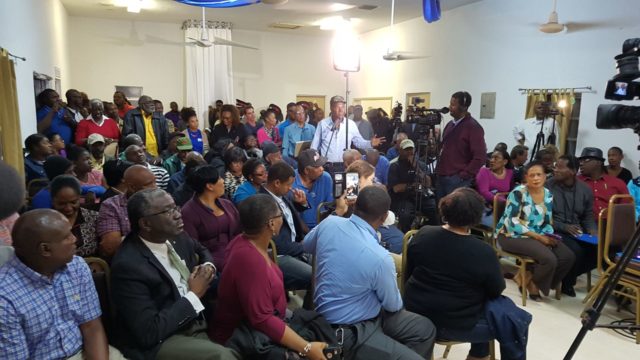 Scores of East Enders in Grand Bahama gathered at a town hall meeting with Oban Energies President Satpal Dhunna Thursday in a quest to get answers about the proposed $5.5 billion project set for their part of the island.

As public debate continues on the $5.5 billion oil refinery that will be built in East Grand Bahama, Parliamentary Secretary in the Ministry of Works Iram Lewis said, as a “down home boy”, he would have thought that East End residents would have been consulted about the deal before it was signed.

Lewis, who also serves as the Member of Parliament (MP) for Central Grand Bahama, hails from East End Grand Bahama.

“Yes, I would have liked to be consulted as an East Ender but that was some of the missteps that the prime minister was talking about when he addressed parliament on the matter,” Lewis said.

Other East End residents who attended the town hall meeting held Thursday, voiced that they felt “disrespected” and being made a “fool” of by government for keeping them in the dark about the deal.

Moving forward Lewis said, the government has committed to more consultation and a review of the process.

“The prime minister didn’t run away from his mistakes and he didn’t make excuses for them. The government will be more vigilant to ensure that whatever mistakes happened in the past will be mitigated.”

As for the mounting environmental concerns from a majority of non-governmental organizations (NGOs), including The Bahamas National Trust (BNT), Lewis said from his vantage point, there are no red herrings.

“I’m doing research of my own but I await the information from the Environmental Impact Assessment. From where I sit though there are not red flags at this point,” he said.

As an architect and an environmental enthusiast, Lewis told Eyewitness News, that given the advent of new technology, many of the concerns will be addressed.

“There are some for and against the project and those that are undecided,” he said.

“When all of the information comes in, if something looks wrong or questionable, I will go and do my own research.

“I will ask all of the hard questions and I won’t run from it.”