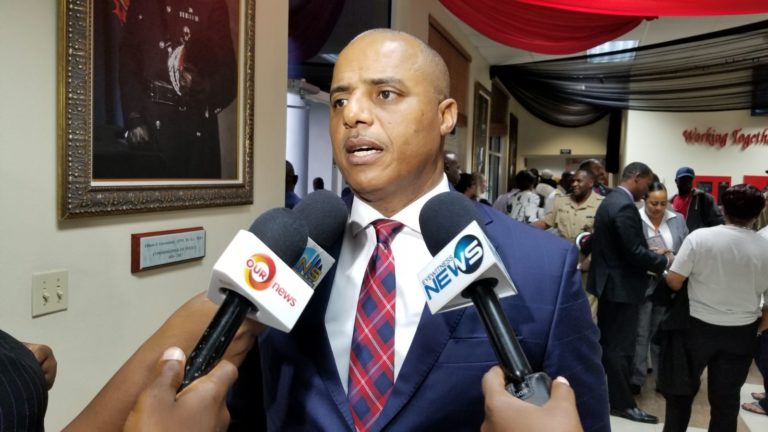 With two murders recorded over the weekend, National Security Minister Marvin Dames said, it will be difficult to address crime without examining the other issues impacting the country, such as joblessness.

“Our government is taking a holistic approach to crime, but we can’t talk about crime if we don’t address unemployment,” Dames said.

“We can’t talk about crime if we don’t address the challenges in education and there is also a social component. We are all are working as a team to create that atmosphere where we can have peaceful communities.”

His comments came at the recent launch of the National Neighborhood Watch Council, which held its first community walkabout in the Southwestern Division on Saturday.

The programme, launched by Prime Minister Dr. Hubert Minnis, was said to be established in an attempt to bridge the gap between police and communities. One of the main objectives of the programme is conflict resolution – a key issue that Dames said appears to be driving many criminal matters.

The Neighborhood Watch Council, he said, will not only assist in this vein but, also provide police with an additional tool to measure success in crime. There are also plans, he added, to develop a Neighborhood Crime Watch app.

“We want to make better use of the technology that is available to us,” he explained.

“It has to be more than just sitting in a room putting it all together. We spent months in consultations with this programme, putting the pieces together, with the religious community and the Bahamas Chamber of Commerce to ensure that everyone is involved and is a stakeholder.

Those that participate in the programme also have to undergo a series of training exercises that Dames said has been beneficial to residents and police.

“We have produced two strategy documents and a manual. So, we put a lot of thought in the execution,” he said.

“The work will come in the back end when we standardize the programme.  Both parties will build confidence and share information.”

Dames added that various areas have been identified as “at risk”, and the Council, he said, will be aggressively pursuing the introduction of closed-circuit television (CCTV) in those communities.

Rooms, he said, will also be designated in police stations to allow for community members to have regular discussions with police.

“Any successful police programme relies heavily on input,” he shared.

“We introduce short term measure since coming into office, but they are only in place to hold until we are able to layer that with medium and long terms efforts that we want to be successful, as we look to further reduce serious crime.”

For the first quarter of this year, serious crime decreased by 14 per cent when compared to last year, according to police statistics.